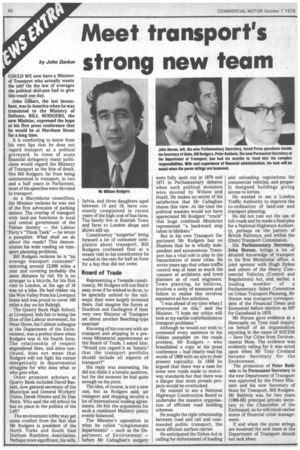 COULD WE now have a Minister of Transport who actually wants the job? On the law of averages the political skid-pan had to give this result one day.

John Gilbert, the last incumbent, was In America when he was translated to the Ministry of Defence. BILL RODGERS, the new Minister, expressed the hope at his first press conference that • he would be at Marsham Street for a long time.

It is comforting to know from his own lips that he does not regard transport as a political graveyard. In times of acute financial stringency many politicians would regard the Ministry of Transport as the kiss of death. Not Bill Rodgers; far from being uninterested in transport, in two and a half years .in Parliament, most of his speeches were devoted to transport.

As a Matylebone councillors, the Minister reckons he was one of the first advocates of parking meters. The overlap of transport with land-use functions in local and central government of the Fabian Society — the Labour -Party's "Think Tank" — he wrote a pamphlet: What shall we do about the roads? This demonstrates his wide reading on transport planning problems.

Bill Rodgers reckons he is "an average transport consumer" motoring around 12,000 miles a year and covering probably the same distance by rail. He is no stranger to a bicycle, for his first visit to London, at the age of 16 was on a bike. He had ridden via the Wye Valley from his Liverpool home and was proud to cover 100 miles a day on his Raleigh.

The Quarry Bank High School, at Liverpool, bids fair to being the Eton of the Labour movement, for Peter Shore, his Cabinet colleague at the Department of the Environment, was a prefect there when Rodgers was in his fourth form. The relationship of respect engendered then, and since continued, does not mean that Rodgers will not fight his corner energetically in departmental struggles for who does what or who gets what.

Other prominet scholars at Quarry Bank included David Basnett, now general secretary of the Municipal and General Workers' Union, Derek Nimmo and Sir Dan Pettit. Who said the old school tie has no place in the politics of the Left?

The environment lobby may get some comfort from the fact that Mr Rodgers is president of the North Yorks and South East Durham Ramblers Association. Perhaps more significant, his wife,

Representing a Teesside constituency, Mr Rodgers will not find it easy, even if he wished to do so, to be specially unkind to the railways: they were largely invented there. Just imagine the furore at Stockton and Darlington if their very own Minister of Transport set about another Beeching-type exercise!

Knowing of his concern with air transport and shipping in a previous Ministerial appointment at, the Board of Trade, I asked him: 'Would you regard it as 'lunatic' that the transport portfolio should include all aspects of transport?"

His reply was interesting. He did not think it a lunatic question, but for the moment he had quite enough on his plate.

The idea, of course, is not a new one, but as Rodgers said, air transport and shipping involve a lot of international trading agreements. He felt the arguments for such a combined Ministry pretty evenly balanced.

The Minister's opposition to what he called "conglomerate departments" such as the Department of Environment before Mr Callaghan's surgery were fully spelt out in 1970 and 1971 in Parliamentary debates when such political monsters were mooted by Wilson and Heath. He makes no secret of his satisfaction that Mr Callaghan shares this view. At the time the political masters would not have• appreciated Mr Rodgers' "crack" that huge combined Ministries represented "a backward step taken in blinkers."

But in his own Transport Department Mr Rodgers has no illusions that he is wholly independent and autonomous. Transport has a vital role to play in the tesuscitation of inner cities. He wrote years ago that urban traffie control was at least as much the concern of architects and town planners as of road engineers. Town planning, he believes, involves a unity of measures and failure to realise this involves expensive ad hoc solutions.

"I was ahead of my time when I pronounced on this," said the Minister. "I hope my critics will look at my earlier contributions to transport problems."

Although he would not wish to commend every sentence in his Fabian pamphlet on the roads problem, Mr Rodgers who brandished a copy at his press conference had clearly read his words of 1959 with an eye to their present topicality. In 1959 he argued that there was a case for some new roads made to motorway standards but that there was a danger that more prosaic projects would be overlooked.

He wanted to see a National Highways Construction Board to undertake the massive organisation of efficient road building, schemes.

He sought the right relationship between road and rail and commended public transport, the most efficient surface carrier.

He anticipated the Dykes Act in calling for enforcement of loading and unloading regulations for commercial vehicles, and properly designed buildings giving access to lorries.

• He wanted to see a London Traffic Authority to improve the co-ordination of land-use and transport planning.

He did not rule out the use of toll-roads and he made a final plea for a National Highways Authority, perhaps on the pattern of British Railways, and within the (then) Transport Commission.

His Parliamentary Secretary, John Horam, brings a lot of detailed knowledge of transport to his first Ministerial office. A joint sponsor with Hugh Dykes and others of the Heavy Corn-. mercial Vehicles (Control and Regulations) Act, and, earlier, a leading member of a Parliamentary Select Committee on Urban Transport Planning, Mr Horam was transport correspondent of the Financial Times and Economist before election as MP for Gateshead in 1970.

Mr Horam gave evidence at a Newcastle on Tyne road inquiry on behalf of an organisation rejoicing in the name of SOCEM Save Our Cities from Environmental Mess, The evidence was evidently telling for it was acted upon when Mr Tony Crosland became Secretary for the Environment.

The promotion of Peter Baldwin to be Permanent Secretary in the new Department of Transport was approved by the Prime Minister and his new Secretary of State for Transport, Bill Rodgers. Mr Baldwin was for two years (1966-68) principal private secretary to the Chancellor of the Exchequer, so he will recall earlier states of financial crisis management= If and when the purse strings are loosened the new team at the Department of Transport should not lack ideas.