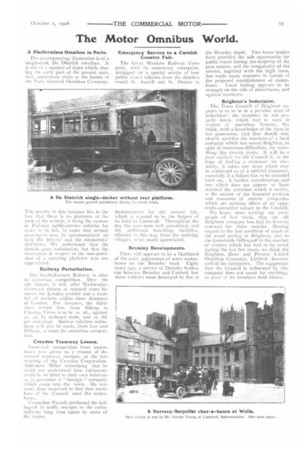 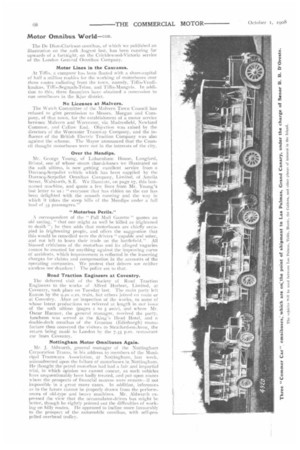 A Platiormless Omnibus in Paris.

The accompanying illustration is of a single-deck De Dietrich omnibus. It is one of a number of types which, during he early part of the present summer, unnerwent trials at the hands of the Paris General Omnibus Company.

The novelty in this instance lies in the fact that there is no platform at the back of the vehicle, it being the custom in Parisian public-service vehicles for space to be left, in order that several passengers may be accommodated on both the drivers' and the conductors' platforms. We understand that the chassis gave satisfaction, but that the innovation in respect of the non-provision of a carrying platform was not apprecia Led,

The South-Eastern Railway is alive to motorbus competition. After the 7th instant, it Will offer IvVednesdayafternoon tickets at reduced rates between the London termini and a number of stations within short distances of T.ondon. For instance, the thirdclass return fare from Sidcup to Charing Cross is to be is. 2d., against 2s. 4d. by ordinary train, and is. 6d. per motorbus. Similar rail-fare reductions will also he made, from Lee and Eltham. :o meet the motorbus competition.

IllerC:HC.1 competition from motorbuses was given as a reason of decreased tramway receipts, at the last meeting of the Croydon Corporation, Alderman Miller remarking that he could not understand how ratepayers could be so blind to their own interests as to patronise a " foreign " company which came into the town. lie was more [haul surprised to find that members of the Council used the motorbuses.

Councillor Parnell attributed the falling-off in traffic receipts to the extraordinary long time taken by some of the trams.

The Great Western Railway Company, with its customary enterprise, arranged for a special service of four public motor vehicles from the districts round St. Austell and St. Dennis to Surnmercourt for the annual fair, which is reputed to bc the largest of its kind in Cornwall. Throughout the day the cars were well patronised, and the additional travelling facilities, afforded in this way from the outlying villages, were much appreciated.

There still appears to be a likelihood of the early appearance of some motorbuses on the Bromley road_ Eight years ago, a service of Daimler brakes ran between Bromley and Catford, but these vehicles were destroyed by fire at the Bromley depot. Two horse brakes have provided the sole opportunity for public travel during the majority of the past season, and the irregularity of the service, together with the high fares, has made many converts in favour of the proposed establishment of motor

buses. Local feeling appears to be strongly on the side of motorbuses, and against tramcars.

The Town Council of Brighton appears to us to be in a peculiar state of indecision : the members do not properly know which wav to turn in respect of motorbus licenses. We think, with a knowledge of the facts in our possession, that they should very charily sacrifice the interests of a local company which has served Brighton, in spite of numerous difficulties, for something like twenty years.. It will be a poor outlook for the Council if, in the hope of finding a customer for electricity, it takes any steps which may be construed as of a spiteful character, especially if a failure has to he recorded later on. A further consideration, and one which does not appear to have received the attention which it merits, is the matter of the financial position and resources of certain companies which are making offers of an apparently-attractive nature to the Council.

We learn, since writing our paragraph of last week, that the old Brighton company has had its licenses renewed for three months. Having regard to the bad condition of much of the wood paving in Brighton, and to the lamentable falling-off in the number of visitors which has had to be noted during the last few years, we think the Brighton, Hove and Preston United Omnibus Company, Limited, deserves well of the ratepayers. The suggestion that the Council is influenced by this company does not count for anything, as none of its members hold shares. The De Dion-Clarkson omnibus, of which we published an illustration on the 20th August last, has been running for upwards of a fortnight, on the Cricklewood-Victoria service of the London General Omnibus Company.

Motor Lines in the Caucasus.

At Tiflis, a company has been floated with a share-capital of half a million roubles for the working of motorbuses over three routes radiating from the town, namely, Tiflis-Vradi kaukas, flis-Segnach-Telau, and Tiflis-Mangeis. In addition to this, three financiers have obtained a concession to run omnibuses in the Kjor district.

No Licenses at Malvern.

The Watch Committee of the Malvern Town Council has refused to give permission to Messrs. Morgan and Company, of that town, for the establishment of a motor service between Malvern and Worcester, via Madrcsfield, Newland Common, and Callow End. Objection was raised by the directors of the Worcester Tramway Company, and the influence of the British Electric Traction Company was also against the scheme. The Mayor announced that the Council thought motorbuses were not in the interests of the city.

Mr, George Young, of Laburnham House, Langford, Bristol, one of whose steam char-à-bancs we illustrated on the moth ultimo, is now getting excellent service from a Darracq-Serpollet vehicle which has been supplied by the Darraeq-Serpollet Omnibus Company, Limited, of Amelia Street, Walworth, S.E. We illustrate, on page 67, this lastnamed machine, and quote a few lines from Mr. Young's last letter to us : " everyone that has ridden on the car has been delighted with the smooth running and the way in which it takes the steep hills of the Mendips under a full load of 35 passengers."

A correspondent of the " Pall Mall Gazette " quotes an old saying, " that one might as well be killed as frightened to death "; he then adds that motorbuses are chiefly occupied in frightening people, and offers the suggestion that this would be remedied were the drivers " capable and sober, and not left to learn their trade on the battlefield." An :biassed criticisms of the motorbus and its alleged vagaries cannot he counted for anything against the improving curve of accidents, which improvement is reflected in the lessening charges for claims and compensation in the accounts of the operating companies. We protest that drivers are neither careless nor drunken The police see to lino.

The deferred visit of the Society of Road Traction Engineers to the works of Alfred Herbert, Limited, at Coventry, took place on Tuesday last. The main party left Eusion by the 9.20 ann. train, but others joined en route or at Coventry. After an inspection of the works, to some of whose latest productions we referred at length in our issue of the roth ultimo (pages a to 5 ante), and where Mr. Oscar Harmer, the general manager, received the party, luncheon was served at the King's Head Hotel, and a double-deck omnibus of the Granton (Edinburgh) manufacture then conveyed the visitors to Stratford-on-Avon, the return being made to London by the 7.35 p.m, restaurant car from Coventry.

Mr. J. Aldworth, general manager of the Nottingham Corporation Trams, in his address to members of the Municipal Tramways Association, at Nottingham, last week, animadverted upon the failure of motorbuses in Nottingham. He thought the petrol motorbus had had a fair and impartial trial, in which opinion we cannot concur, as such vehicles have unquestionably been badly treated, and put upon routes where the prospects of financial success were remote—if not impossible in a g-reat many cases. In addition, inferences as to the future cannot be properly drawn from the performances of old-type and heavy machines. Mr. Aldworth cxpresSed the view that the accumulator-driven bus might be better, though he rightly pointed out the difficulties of working on hilly routes. Tie appeared to incline more favourably to the prospect of the automobile omnibus, with self-propelled overhead trolley.