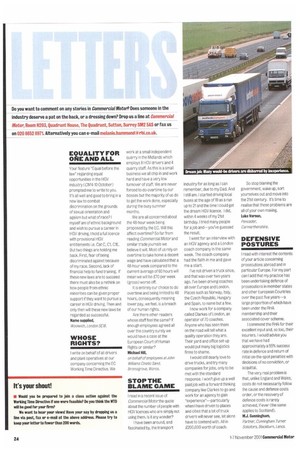 Page 24, 1st November 2001 — STOP THE BLAME GAME
Close
Noticed an error?
If you've noticed an error in this article please click here to report it so we can fix it.
Keywords : Truck Driver, Truck, Mot Test

I read in a recent issue of Commercial Motorthe quote about the number of people with HGV licences who are simply not using them. Is it any wonder?

I have been around, and fascinated by, the transport industry for as long as loan remember, due to my Dad. And I still am. I started driving local buses at the age of 19 as a run up to 21 and the time I could get the dream HGV licence. I did, within 4 weeks of my 21st birthday. I tried many people for a job and—you've guessed the result.

I went for an interview with an HGV agency and a London coach company in the same week. The coach company had the faith in me and gave me a start.

I've not driven a truck since, and that was over two years ago. I've been driving coaches all over Europe and London. Places such as Norway, Italy, the Czech Republic, Hungary and Spain, to name but a few.

I now work for a company called Clarkes of London, an operator of 70 coaches. Anyone who has seen them on the road will tell what a quality operation they are. Their yard and office set-up would put many big logistics firms to shame.

I would still dearly love to drive trucks, and try many companies for jobs, only to be met with the standard response. I won't give up a well paid job with a forward thinking company like Clarkes to go and work for an agency to gain "experience"—particularly when I have driven to places and cities that a lot of truck drivers will never see, let alone have to contend with. All in .£200,000 worth of coach. So stop blaming the government, wake up, sort yourselves out and move into the 21st century. It's time to realise that these problems are all of your own making. Luke Vernon, Pencacier, Carmarthenshire.