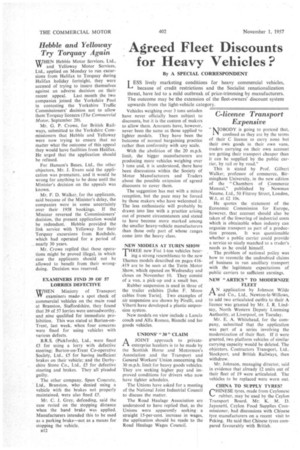 Page 46, 1st November 1957 — Agreed Fleet Discounts for Heavy Vehicles ?
Close
Noticed an error?
If you've noticed an error in this article please click here to report it so we can fix it.
Keywords : Vehicles, Viberti, Air Suspension, Transport, Trucks, Technology

By A SPECIAL CORRESPONDENT

ESS lively marketing conditions for heavy commercial vehicles, " because of credit restrictions and the Socialist renationalization threat, have led to a mild outbreak of price-trimming by manufacturers. The outcome may be the extension of the fleet-owners' discount system upwards from the light-vehicle category.

Vehicles weighing over 3 tons unladen have never officially been subject to discounts, but it is the custom of makers to allow them. Amounts have, however, never been the same as those applied to lighter models. They have been the hutcome of normal bargaining practice rather than conformity with any scale.

With the abolition of the 20 m.p.h. limit, the bigger manufacturers are producing more vehicles weighing over 3 tons and, it is understood, there have been discussions within the Society of Motor Manufacturers and Traders about the possible extension of agreed discounts to cover them.

The suggestion has met with a mixed reception, but the pace may be forced by those makers who have welcomed it. The less enthusiastic will probably be drawn into line with a practice arising out of present circumstances and stated to have become more marked among the smaller heavy-vehicle manufacturers than those only part of whose ranges come into the heavy class.

NEW MODEIS AT TURIN SHOW THREE new Fiat 1-ton vehicles bearing a strong resemblance to the new Thames models described on pages 416.419 are to be seen at the Turin Motor Show, which opened on Wednesday and closes on November 10. They consist of a van, a pick-up and a small bus. Rubber suspension is used in three of the trailer exhibits [John F. Moon cables from Turin]. Two examples of air suspension are shown by Pirelli, and Viberti have developed a plastic suspension system.

New models on view include a Lancia coach and Alfa Romeo, Bianchi and Iso goods vehicles.

AJOINT approach to privateenterprise hauliers is to be made by the Scottish Horse and Motormen's Association and the Transport and General Workers' Union concerning the 30 m.p.h. limit for heavy goods vehicles. They are seeking higher pay and improved conditions for drivers who now have tighter schedules.

The Unions have asked for a meeting of the National Joint Industrial Council to discuss the matter.

The Road Haulage Association are understood to have replied that, as the Unions were apparently seeking a straight 15-per-cent. increase in wages, the application should be made to the Road Haulage Wages Council.