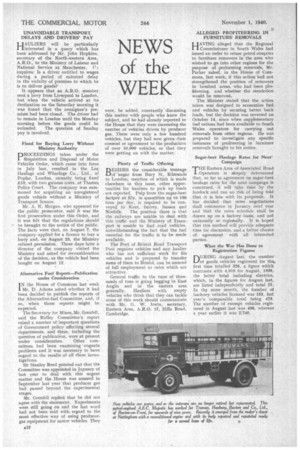 Page 14, 1st November 1940 — NEWS of the WEEK
Close
Noticed an error?
If you've noticed an error in this article please click here to report it so we can fix it.
Keywords : Climate Change, Road Transport, Truck, Vehicle, Motoring Taxation In The United Kingdom, Haulage, Salter Report

HAULIERS will be particularly interested in a query which has been addressed by Mr. John Hopkins, secretary of the North-western Area, A.R.O., to the Ministry of Labour and National Service at Manchester.

inquires: Is a driver entitled to wages during a period of enforced delay in the vicinity of premises to which he is to deliver goods?

It appears that an A.R.O. member. sent a lorry from Liverpool to London, but when the vehicle arrived at its destination on the Saturday morning it was found that the consignee's premises had been closed. The driver had to remain in London until the Monday morning before the goods could be unloaded. The question of Sunday pay is involved.

PROCEEDINGS taken under the Requisition and Disposal of Motor Vehicles Order, which came into force in July last, resulted in the Lea Haulage and Wharfage Co., Ltd., of Poplar, London, recently being fined £10, with two guineas costs, at Thames Police Court. The company was suitmoned for acquiring an unregistered goods vehicle without a Ministry of

Mr. A. K. Morgan, who appeared for the public prosecutor, said it was the first prosecution under this Order, and it was felt that the regulations should be brought to the notice of the public. The facts were that, on August 7, the company applied for a licence to buy a lorry and, on August 23, the Ministry refused permission. Three days later a director of the company visited the Ministry and asked for reconsideration of the decision, as the vehicle had been bought on August 12.

Alternative Fuel Report—Publication under Consideration IN the House of Commons last week 1 Mr. D. Adams asked whether it had been decided to publish the reports of the Alternative-fuel Committee, and, if so, when those reports might be expected.

The Secretary for Mines, Mr. Grenfell, said the Ridley Committee's report raised a number of important questions of Government policy affecting several departments, and these, including the question of publication, were at present

under consideration. Other committees had been examining cognate problems and it was necessary to have regard to the results of all these investigations.

Sir Stanley Reed pointed out that the Committee was appointed in Jaanary of last year to deal with this urgent matter and the House was assured in September last year that producer gas had passed beyond the experimental stages.

Mr. Grenfell replied that he did not agree with the statement. Experiments were still going on and the last word had not been said with regard to the most effective way of using producergas equipment for motor vehicles. They Plenty of Traffic Offering

DESIDES the considerable tonnage Vol "sugar from Bury St, Edmunds to London, mention of which is made elsewhere in this issue, other opportunities for hauliers to pick up loads are reported. Pulp from the sugar-beet factory at Ely, in quantities up to 100 tons per day, is required to be conveyed to Kent, Surrey, Sussex and

Norfolk. The position there is that the railways are unable to deal with this traffic and the Ministry of Trans, port is unable to find road .vehicles, notwithstanding the fact that the fuel essential for the traffic is to be made available.

The Port of Bristol Road Transport Pool requires vehicles 'and any haulier who has not sufficient work for his vehicles and is prepared to transfer some of them to Bristol, can be assured of full employment at rates which are attractive.

General traffic to the tune of thousands of tons is going begging in East Anglia and in the eastern area generally. Hauliers with empty vehicles who think that they can tackle some of this work should communicate with Mr. G. W. Irwin, secretary, Eastern Area, A.R.O, 17, Hills Road, Cambridge. ALLEGED PROFITEERING IN FURNITURE REMOVALS

HAVING alleged that the Regional Commissioner in South Wales had issued an order to refuse petrol coupons to furniture removers in the area who wished to go into other regions for the purpose of performing removals, Mr. Parker asked, in the House of Commons, last week, if this action had not strengthened the position of removers in bombed areas, who had been piofiteering, and whether the restriction would be removed.

The Minister stated that the iction taken was designed to economize fuel and vehicles by securing better back loads, but the decision was reversed on October 14, since when supplementary fuel rations had been available to South Vales operators for carrying out removals from other regions. He was prepared to investigate any specific instances of profiteering in furniture removals brought to his notice, Sugar-beet Haulage Rates for Next' Campaign THE Eastern Area of Associated Road ,Operators is lready determined that, so far as agreement on sugar-beet haulage rates for the next campaign is concerned, it will take time by the forelock and rim no risk of being told that it is late with its proposals. It has decided that rates negotiations shall commence in January next year and that the rates schedule shall be drawn up on a factory basis, and not nationally or regionally. It is hoped that this method will provide adequate time for discussion, and a better chance of agreement with all interested parties.

What the War Has Done to Registration Figures