LINKING UP LANC BY MOTORBUS. 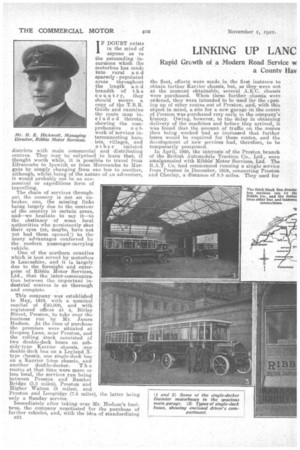 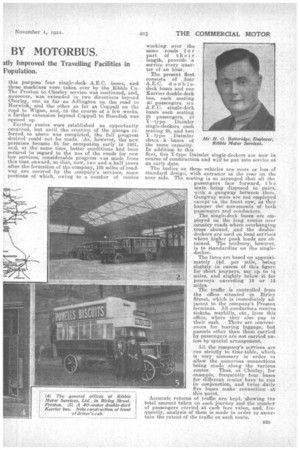 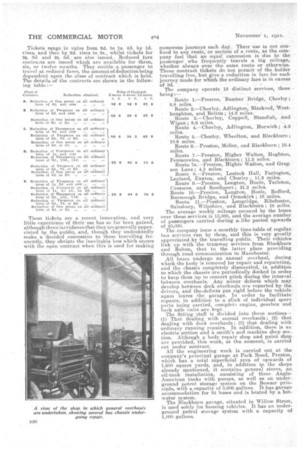 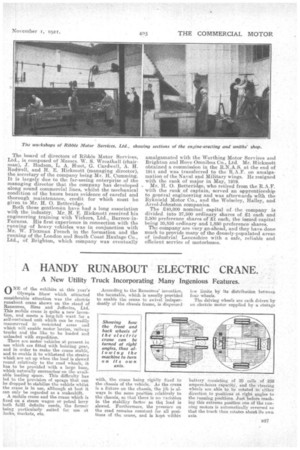 Page 14, 1st November 1921 — LINKING UP LANC BY MOTORBUS.
Close
Noticed an error?
If you've noticed an error in this article please click here to report it so we can fix it.
Keywords : Preston, Ribble Motor Services, Action, Stagecoach In Preston, Stagecoach North West

IF DOUBT exists in the mind of anyone as to the astounding incursions which the motorbus has made into rural and sparsely -populated areas throughout the length a n d breadth of the -Country, they should secure a copy of the T.B.R. Guide and examine the route map included therein, showing the com prehensive n e.twork of services interconnecting hamlets, villages, and other isolated districts with main commercial and distributing centres. They may be stiiprised to learn that, if thought worth while, it is possible to travel from Ilfracombe to Ipswich or from Morecambe to Margate by simply changing from one bus to another, although, whilst being of the nature of an adventure, it would probably not he an economical or expeditious form of travelling. The chain of services throughout the country is not an unbroken one, the missing links being largely due to the contour of the country in certain areas, and—we hesitate to say it—to the obstinacy of some local authorities who persistently shut their eyes (or, maybe, have not yet had them opened!) to the many adrantages conferred by the modern passenger-carrying vehicle.

One of the northern counties which is best served by motorbus is Lancashire, and it is largely due to the foresight and enterprise of Ribble. Motor Services, Ltd., that the inter-cornmunicas tion between thefl important industrial centres is so thorough and complete.

This company was established in May, 1919, with a nominal capital of 240,000, and with registered offices at 4, Birley Street, Preston, to take over the business run by Mr. James Hodson. At the time of purchase the premises were situated at Gregson Lane, near Preston, and the rolling stock consisted el two double-deck buses on subsidy-type Karrier chassis, one double-deck bus on a Leyland Itype chassis, one single-deck bus on a Karrier 3-ton chassis, and

another double-decker. T h e route-a at that time were more or less local, the services run being between Preston and Bamber Bridge (3.3 miles), Preston and Higher Walton (3 miles), and Preston and Longridge (7.5 miles), the latter being only a. Sunday service.

Immediately after taking over Mr. FIodson's business, the company negotiated for the purchase of further vehicles', and, with the idea of standardizing L24 the fleet, efforts were made in the first instance to obtain. further Karrier chassis, but, as they were not at the moment obtainable, several A.B.C. chassis were purchased. When these further c.haasiswere ordered, they were intended to be used for the cperiing up of other routes out of Preston, and, with this object in mind, a site for a new garage in the centre of Preston was purchased very early in the company's history. Owing, however, to the delay in obtaining -delivery of the machines and befoie they arrived, it was found that the amount of traffic on the routes then being worked had so increased that further buses would be required for these routes, and the development of new services had, therefore, to be temporarily postponed. In April, 1920, the interests of the Preston branch of the British Automobile Traction Co., Ltd., were amalgamated with RibbleC Motor Services, Ltd. The B.A.T. Co. -had commenced running a single service from Preston in December, 1919, connecting Preston and Chorley, a distance of 8.8 miles. They used for this purpose four single-deck A.E.C. buses, and these machines were taken over by the Ribble Co.-The Preston to Charley service was .continued, and, moreover, was .extended in two directions beyond Cherley, one as far as Adlington on the road to Horwieh, and the other as far as Coppull on the road to Wigan, and, in the course of a few weeks, Tarther extension beyond Coppull to Standish was opened up.

Further routes were established as opportunity occurred, but until the erection of the garage referred to above was completed, the fall progress desired could not be made. As, however, the new premises became fit for occupation early in 19'21, and, at the same time, better conditions had been secured in regard to the use of the roads for new bus services, considerable progress was made from this time onward, so that, now, two and a half years after the formation of the company, 125 miles of roadwayare covered by the company's services, some portions of which, owing to a number of routes

part of their length, provide a service every quarter of an hour.

The present fleet consists of font.

chars h banes of the same capacity. In addition to this fleet, five Y-type Daimler single-deckers are now in course of construction and will be put into service at an early date.

The bodies on these vehicles are more or less of standard design, with entrance at the rear on the near side. The seating is so arranged that all the passengers face forward, t h c seats being disposed in pairs, with a gangway between them. Gangway seats are not employed except on the front row, as they hamper the movements of both passengers and conductors. The single-deck buses are employed on the long routes over country roads where overhanging trees abound, and the doubledeckers are used on local services where higher peak 1.oads are obtained. The tendency, however, is to standardize on the singledecker.

The fares are based on approximately lid. per mile, being slightly in excess of this figure for short journeys, say up to miles, and slightly 'below it for journeys .exceeding 10 or 12 miles.

The traffic is controlled from the office situated in Birleef. Street, which is immediately adjacent to the company's Preston terminus. All conductors receive. tickets, waybills, etc., from this office, where they also pay in their cash. There are conveniences for leaving luggage, but parcels other than those carried by passengers are not carried unless by special. arrangement.

All the company's services are run strictly to time-table, which. is very necessary in order to allow the numerous connections being made along the various routes. Thus, at Chorley, for example, frequently four buses for different routes have to run in conjunction, and twice daily five buses make connection at this point.

Accurate returns of traffic are kept, showing the total amount taken on each journey and the number of passengers carried at each fare value, and, frequently, analysis of them is made in order to ascertain the extent of the traffic on each route.

Tickets range in value from 2d. to is. 4d. by 1d. rises, and then by 2d. rises to 2se, whilst tickets for 28. 3d. and 2s. 6d. are also issued. Reduced fare contracts are issued which are available for three, six, or twelve months. They entitle a. passenger to travel at reduced fares, the amotint of deductionbeing dependent upon the cla-ss of contract which is held.. The details of the contracts are shown in the following table:

These tickets are a recent innovation, and very -little experience of their use has so far been gained, although ther e is evidence that they are generally appreciated by the public, and, though they undoubtedly make a decided concession to those travelling frequently, they obviate the inevitable loss which occurs with the open contract when this is used for making

numerous journeys each day. Their nee is not confined to any route, or section of a route, as the company feel that an equal concession is due to thepassenger who frequently travels a big mileage, whether always over the same route or otherwise. These contract tickets do notpermit of the holder travelling free, but give a reduction in fare for each journey made for which the erdinary fare is in excess

Route 10.-Preston, Longton, Hoole, Rufford, Burseough Bridge, and Orrnskirk ; 18 miles. Route 11.-Preston, Longridge, Ribehester, Salesbury, Wilpshire, and Blackburn ; 18 miles. The average weekly mileage covered by the buses over these services is 13,500, and the average number of passengers carried during a like period upwards of 40,000.

The company issue a monthly time-table of regular bus services run by them, and this is very greatly appreciated .by the travelling public. Their vehicles link up with the tramway services from Blackburn and Bolton, that to the latter place providing through road communication to Manchester.

All buses undergo an annual overhaul, during which the body is removed for repair and repainting, and the chassis completely dismantled, in addition to which the chassis are periodically docked in order to keep them up to concert pitch during the interval between overhauls. Any minor defects which may develop between dock overhauls are reported by the drivers, and the•defeets put right before the vehicle again leaves the garage. in order to facilitate repairs, in addition to a sock of individual spare narts being carried, complete engine, gearbox and Lack axle units are kept. The fitting staff is divided into three sections(1)• That dealing with annual overhauls; (2) that dealing with dock overhauls ; (3) that dealing with ordinary running repairs. In addition, there is an electric section and a smith's and machine Shop section. Although a body repair shop and paint shop. are provided, this work, at the moment, is -carried out under contract.

All the engineering work is carried out at the company's principal garage at Park Road, Preston, which has a total superficial area of upwards of 1,600 square yards, and, in addition to the shoPs already Mentioned, it contains general stores, an oil-tank installation, consisting of three AngloA_merican tanks with pumps, as well as an underground petrol storage system on the Bowser principle, with a capacity of 3,000 gallons. Ithas_garage accommodation for 24 buses and is heated by a hotwater system.

The Blackburn forage, situated in Willow Street, is used solely for housing vehicles. It has an underground petrol storage system with a capacity of 1,000 gallons.

The board of directors of Ribble Motor Services, Ltd., is composed of Messrs. W. S. Wrea.thall (chairman), J. Hodson, L. A. Hunt, G. Cardwell, A. H. Rodwell, and H. E. Hickmott (managing director), the Secretary of the company being Mr. H. Cumming. It is largely due to the far-seeing enterprise of the managing director that the company has developed along sound commercial lines, whilst the mechanical condition of the buses bears evidence of careful and thorough maintenance, credit for which must be given to Mr. H. 0. Betteridge. Both these gentlemen have had a long association with the industry. Mr. H. E. Hickmott received his engineering training with Tickers, Ltd., Barrow-inFurness. His first experience in connection with the running of heavy vehicles was in conjunction with Mr. W. Flexman French in the formation and the running of the London and South Coast Haulage Co., Ltd., of Brighton, which company was eventually amalgamated with the Worthing Motor Services and Brighton and Hove Omnibus Co. Ltd. Mr. Hickmott obtained a commission in the RANT.A.S. at the end of 1914 and was transferred to the R.A.F. on amalgamation of the Naval and Military wings. He resigned with the rank of major in May, 1919. . Mr. H. 0. Betteridge, who retired from the

with the rank of captain, served an apprenticeship to general engineering and was afterwards with the Ryknield Motor Co., and the Wolseley, Halley, and Arrol-Johnston companies.

The company are very go-ahead, and they have done much to provide many of the densely-populated areas of industrial Lancashire with a safe, reliable and efficient service of motorbuses.