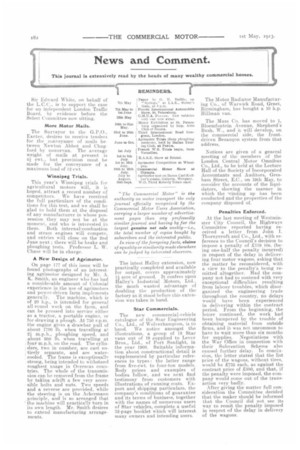 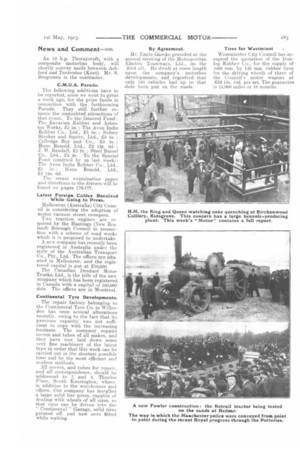 Page 14, 1st May 1913 — News and Comment.
Close
Noticed an error?
If you've noticed an error in this article please click here to report it so we can fix it.
Keywords : Associated Equipment Company, Thornycroft, Traction Engine, Deal, Ford Motor Company

Sir Edward White, on behalf of the L.C.C., is to support the ease for an independent London Traffic Board, by evidence before the Select Committee now sitting.

This year's Winnipeg trials for agricultural motors will, it is hoped, attract a record number of competitors. W4i. have received the full particulars of the conditions for this test., and we shall be glad to hold them at the disposal of any manufacturer in whose possession they may not be at the moment, and who is interested in them. Both internal-combustion and steam engines will compete, and entries will close on the 2nd June next-; there will he brake and ploughing tests. Professor L. W. Chase will be in charge.

A New Design of Agrimotor.

On page 177 of this issue will be found photographs of an interesting agrirnotor designed by Mr. A. K. Smith, an engineer who has had a considerable amount of Colonial experience in the use of agrimotors and power-driven farm implements generally. The machine, which is of 20 b.p., is intended for general all round work on the farm, and can be pressed into service either as a tractor, a portable engine, or for drawing a plough. At 750 r.p.m. the engine gives a drawbar pull of about 1700 lb. when travelling at 21 m.p.h., ploughing speed, and about 930 lb. when travelling at :four m.p.h. on the road. The cylinders, two in number, are east en! tirely separate, and are watercooled. The frame is exceptionally . strong, being intended to withstand roughest usage in Overseas countries. The whole of the transmission can be removed from the frame by taking adrift a few very accessible bolts and nuts. Two speeds and areverse are provided, while the steering is on the Ackermann .principle, and is so arranged that ' the machine will practically turn in its own length. Mr. Smith desires to extend manufacturing arrangements.

"The Commercial Motor" is the authority on motor transport the only journal officially recognized fry the Commercial Motor Users Association, carrying a larger number of advertisement pages than any professedly similar journal and having by far the largest genuine net sale weekly—i.e., the total number of copies bought by subscribers and the interested public.

In view of the foregoing facts, claims of equality or similarity made elsewhere can be judged by interested observers.

The latest Halley extension, now practically completed and available for output, covers approximately 1i acre of ground. It confers upon Halley's Industrial Motors, Ltd.. the much wanted advantage of doubling tile production of the factory as it stood before this extension was taken in hand.

The new commercial-vehicle catalogue of the Star Engineering Co., Ltd., of Wolverhampton, is to hand. We notice amongst the illustrations, a group of 18 Star vans out of 19 supplied to Lever Bros., Ltd., of Port Sunlight, in the year 1908. Suitable information about constructional detail is supplemented by particular references to types: the latter range from five-cwt. to four-ton models. Body prices and examples of bodies follow, and we next find testimony from customers with illustrations of running costs. Export and shipping particulars, the company's conditions of guarantee and its terms of business, together with the names of numerous users of Star vehicles, complete a useful 32-page booklet which will interest many owners and intending users.

The Mass Co. has moved to 1, Bloemfontein Avenue, Shepherd's Bush, W., and it will develop, on the commercial side, the frontdriven Bezancon system from that address.

Notices are given of a general meeting of the members of the London Central Motor Omnibus Co., Ltd., to be held at the Lecture Hall of the Society of Incorporated Accountants arid Auditors, Gresham Street, B.C., on 19th May, to consider the accounts of the liquidators, showing the manner in which the -vinding up has been conducted and the properties of the company disposed of.

At the last meeting of Westminster City Council, the Highways Committee reported having received a, letter from John I. Thornycroft and Co., Ltd., with reference to the Council's decision to impose a penalty of £119 1.08. (being one-half the penalty incurred) in respect of the delay in delivering four motor wagons. asking that the matter be reconsidered, with a view to the penalty's being remitted altogether. Had the company not had to contend with very exceptional difficulties resulting from labour troubles, which disorganized the engineering trade throughout the country, no delays would have been experienced in delivering within the contract period. From the beginning, the letter continued, the work had been hampered by the trouble of obtaining material from outside firms, and it was not uncommon to have to wait more than six months for supplies. Negotiations with the War Office in connection with their Subvention Scheme also caused further delay. In conclusion, the letter stated that the list price of the wagons, without tires, would be £735 each, as against the contract price of 2580, and that, if the penalty were imposed, the company would come out of the transaction very badly. After giving the matter full consideration the Committee decided that the maker should be informed that the Council did not see its way to remit the penalty imposed in respect of the delay in delivery of the wagons.

An 18 h.p. Thornycroft, with a composite. motorbus body, will shortly convey mails between Ashford and Tentenden (Kent). Mr. S. Bergersen is the contractor.

The steam examination paper and directions to the drivers will be found on pages 176-177.

Melbourne (Australia) City Council is considering the adoption of motor vacuum street sweepers. Two traction engines are re quired by the Hastings (New Zealand) Borough Council in connection with a scheme of road works which it is proposed to undertake A new company has recently been registered in Australia under the style of the Australian Transport Co., Pty., Ltd. The offices are situated in Melbourne, and the registered capital is put at 210,500. The Canadian Dreduot Motor Trucks, Ltd., is the title of the new company which has been registered in Canada with a capital of 250,000 dols. The offices are in Montreal.

The repair factory belonging to the Continental Tyre Co. in Willesden has seen several alterations recently, owing to the fact that its previous capacity was not sufficient to cope with the increasing business. The company repairs covers and tubes of all makes, and they have now laid down some very fine machinery of the latest type in order that this work can be carried out in the shortest possible time and by the most efficient and modern methods.

All covers, and tubes for repair. and all correspondence, should be addressed to 3 and 4, Thurloe Place, South Kensington, where. in addition to the warehouses and offices, this company has installed a large solid tire press, capable of dealing with wheels of all sizes, so that vans can be driven into the " Continental " Garage, solid tires pressed off, and new ones fitted while waiting. By Agreement.

Mr. Emile Garcke presided at the annual meeting of the Metropolitan Electric Tramways, Ltd., on the 23rd nit. He dwelt at some length upon the company's motorbus developments, and regretted that only 100 vehicles had up to that date been put on the roads. Tires for Westminst .