Tribunal acts against partial ng out • • 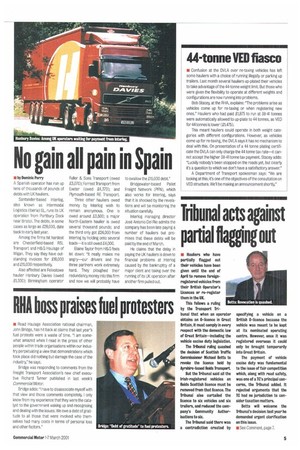 • Hauliers who have partially flagged out their vehicles have been given until the end of April to remove foreignregistered vehicles from their British Operator's Licences or re-register them in the UK.

This follows a ruling by the Transport Tribunal that when an operator obtains an 0-licence in Great Britain, it must comply in every respect with the domestic law of Great Britain—including the vehicle excise duty legislation.

But the Tribunal said all the Irish-registered vehicles on Raids Scottish licence must be removed from that licence, The Tribunal also curtailed the licence to six vehicles and six trailers, and reduced the company's Community Authorisations to six, The Tribunal said there was a contradiction created by specifying a vehicle on a British 0-licence because the vehicle was meant to be kept at its nominated operating centre. However, once it was registered overseas it could only be brought temporarily into Great Britain.

The payment of vehicle excise duty was fundamental to the issue of fair competition which, along with road safety, was one of a TC's principal concerns, the Tribunal added, It rejected arguments that the IC had no jurisdiction to consider taxation matters.

Betts will welcome the Tribunal's decision: last year he demanded urgent clarification on this issue.