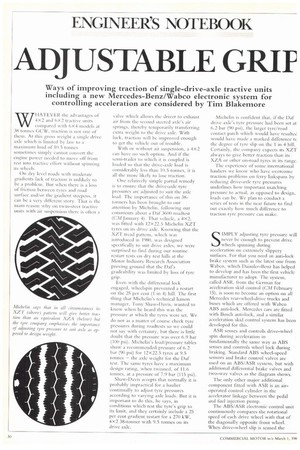 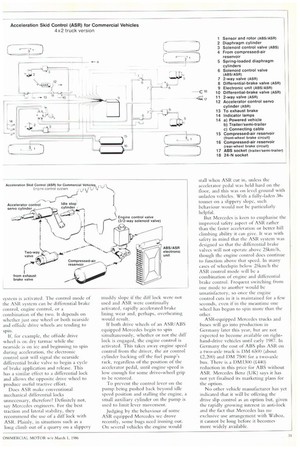 WHATEVER the advantages of 4x2 and 6x2 tractive units compared xvith 6X 4 models at 38 tonnes GCW, traction is not one of them. At this gross weight a single drive axle which is limited by law to a maximum load of 10.5 tonnes sometimes simply cannot convert the engine power needed to move off from rest into tractive effort without spinning its wheels.

On dry level roads with moderate gradients lack of traction is unlikely to be a problem. But when there is a loss of friction between tyres and road surface and/or the gradient steepens, it can be a very different story. That is the main reason why on twin-steer tractive units with air suspension there is often a valve which allows the driver to exhaust air from the second steered axle's air springs, thereby temporarily transferring extra weight to the drive axle. With luck, traction will be improved enough to get the vehicle out of trouble.

With or without air suspension, a 4x2 can have no such option. And if the semi-trailer to which it is coupled is loaded so that the drive-axle load is considerably less than 10.5 tonnes, it is all the more likely to lose traction.

One relatively simple partial remedy is to ensure that the drive-axle tyre pressures are adjusted to suit the axle load. The importance of this on 38tonners has been brought to our attention by Michelin, following our comments about a 1)aI 3600 roadtest (C34 January 4). That vehicle, a 4x2, was fitted with 12x 22.5 Michelin XZT tyres on its drive axle. Knowing that the XZT tread pattern, which was introduced in 1980, was designed specifically to suit drive axles, we were surprised to find during our routine restart tests on dry test hills at the Motor Industry Research Association proving ground that the Dais gradeability was limited by loss of tyre grip.

Even with the differential lock engaged, wheelspin prevented a restart on the 25 per cent (1 in 4) hill. The first thing that Michelin's technical liaison manager, Tony Shaw-Davis, wanted to know when he heard this was the pressure at which the tyres were set. We do not as a matter of course check tyre pressures during roadtests so we could not say with certainty, but there is little doubt that the pressure was over 6.9 bar (100 psi). Michelin's load/pressure tables show a recommended pressure of 6.2 bar (90 psi) for 12X 22.5 tyres at 9.5 tonnes — the axle weight for the Dal test. The same tyres have a maximum design rating, when twinned, of 11.6 tonnes, at a pressure of 7.9 bar (115 psi).

Shaw-Davis accepts that normally it is probably impractical for a haulier continually to adjust tyre pressures according to varying axle loads. But it is important to do this, he says, in conditions which test the tyre's grip to its limit, and they certainly include a 25 per cent gradient restart for a 270 kW, 4x 2 38-tot-met with 9,5 tonnes on its drive axle.

Michelin is confident that, if the Daf drive axle's tyre pressure had been set at 6.2 bar (9) psi), the larger tyre/road contact patch which would have resulted would have made a marked difference tc the degree of tyre slip on the 1 in 4 hill. Certainly, the company expects its XZT always to give better traction than its XZA or other on-road tyres in its range.

The experience of some international hauliers we know who have overcome traction problems on ferry linkspans by reducing drive-axle tyre pressures .underlines how important matching pressure to actual, as opposed to design, loads can be. We plan to conduct a series of tests in the near future to find out exactly how much difference to traction tyre pressure can make.

SIMPLY adjusting tyre pressure will never be enough to prevent drive wheels spinning during acceleration on extremely slippery surfaces. For that you need an anti-lock brake system such as the latest one from Wabco, which Daimler-Benz has helped to develop and has been the first vehicle manufacturer to adopt. The system, called ASR, from the German for acceleration skid control (CM February 13), is soon to become an option on all Mercedes rear-wheel-drive trucks and buses which are offered with Wabco ABS anti-lock. Mercedes cars are fitted with Bosch anti-lock, and a similar acceleration skid control system has been developed for this.

ASR senses and controls drive-wheel spin during acceleration in fundamentally the same way as ABS senses and controls wheel lock during . braking. Standard ABS wheel-speed sensors and brake control valves are used on an ABS/ASR system, but with additional differential brake valves and two-way valves as the diagram shows.

The only other major additional component fitted with ASR is an airoperated control cylinder in the accelerator linkage between the pedal and fuel injection pump.

The ABS/ASR electronic control unit continuously compares the rotational speed of each drive wheel with that of the diagonally opposite front wheel. When drive-wheel slip is sensed the

system is activated. The control mode of the ASR system can be differential brake control, engine control, or a combination of the two. It depends on whether just one wheel or both nearside and offside drive wheels are tending to spin

If, for example, the offside drive wheel is on dry tarmac while the nearside is on ice and beginning to spin during acceleration, the electronic control unit will signal the nearside differential brake valve to begin a cycle of brake application and release. This has a similar effect to a differential lock and allows the opposite drive wheel to produce useful tractive effort.

Does ASR make conventional mechanical differential locks unnecessary, therefore? Definitely not, say Mercedes engineers. For the best traction and lateral stability, they recommend the use of a diff lock with ASR. Plainly, in situations such as a long climb out of a quarry on a slippery muddy slope if the diff lock were not used and ASR were continually activated, rapidly accelerated brake lining wear and, perhaps, overheating would result.

If both drive wheels of an ASR/ABS equipped Mercedes begin to spin simultaneously, whether or not the dill lock is engaged, the engine control is activated. This takes away engine speed control from the driver, the air control cylinder backing off the fuel pump's rack, regardless of the position of the accelerator pedal, until engine speed is low enough for some drive-wheel grip to be restored.

To prevent the control lever on the pump being pushed back beyond idle speed position and stalling the engine, a small auxiliary cylinder on the pump is used to limit lever movement.

Judging by the behaviour of some ASR equipped Mercedes we drove recently, some bugs need ironing out. On several vehicles the engine would stall when ASR cut in, unless the accelerator pedal was held hard on the floor, and this was on level ground with unladen vehicles. With a fully-laden 38Conner on a slippery slope, such behaviour would not be particularly helpful.

But Mercedes is keen to emphasise the improved safety aspect of ASR rather than the faster acceleration or better hill climbing ability it can give. It was with safety in mind that the ASR system was designed so that the differential brake valves will not operate above 25km/h, though the engine control does continue to function above that speed. In many cases of wheelspin below 25km/h the ASR control mode will be a combination of engine and differential brake control. Frequent switching from one mode to another would be unsatisfactory, so once the engine control cuts in it is maintained for a few seconds, even if in the meantime one wheel has begun to spin more than the other.

ASR-equipped Mercedes trucks and buses will go into production in Germany later this year, but are not expected to become available on righthand-drive vehicles until early 1987. In Germany the cost of ABS plus ASR on a two-axle truck is DM 6500 (about £2,200) and 1)M 7500 for a two-axle bus. There is a DM1300 (12440) reduction in this price for ABS without ASR. Mercedes Benz (UK) says it has not yet finalised its marketing plans for the option.

No other vehicle manufacturer has yet indicated that it will be offering the drive slip control as an option but, given the rapidly growing interest in anti-lock and the fact that Mercedes has no exclusive use arrangement with Wabco, it cannot be long before it becomes more widely available.