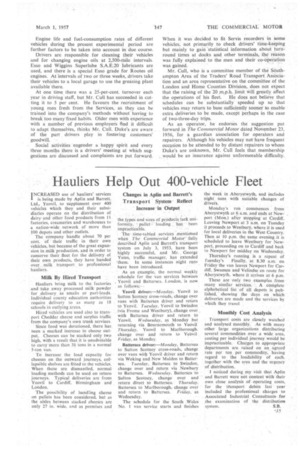 Page 57, 1st March 1957 — Hauliers Help Out 400-vehicle Fleet
Close
Noticed an error?
If you've noticed an error in this article please click here to report it so we can fix it.
Keywords : South Somerset, West Country Carnival, Yeovil, Battersea

Changes in Aplin and Barrett's Transport System Reflect Increase 1w Output INCREASED use of hauliers' services is being made by Aplin and Barrett, Ltd., Yeovil, to supplement over 400 vehicles which they and their subsidiaries operate on the distribution of dairy and other food products from Ii. factories, creameries and warehouses to a nation-wide network of more than 100 depots and other outlets.

The company handle about 70 per cent, of their traffic in their Own vehicles, but because of the great expansion in milk production. and in order to conserve their fleet for the delivery of their own products, they have handed over milk transport to professional hauliers.

Hauliers bring milk to the factories and take away processed milk powder for delivery as smalls or part-loads. Individual county education authorities require delivery to as many as 18 schools in outlying areas.

Hired vehicles are used also to transport Cheddar cheese and surplus traffic from the company's own trunk services Since food was derationed, there has been a marked increase in cheese output. Cheeses can be stacked only two high, with a result that it is unadvisable to carry more than 3+ tons in a normal 5-ton van.

To increase the load capacity for• cheeses on the outward journeys, cotlapsible shelves are fitted to the vehicles. When these are dismantled, normal loading methods can be used on return journeys. Typical deliveries arc from Yeovil to Cardiff, Birmingham and London.

The possibility of handling cheese on pallets has been considered, but as the aisles between stacked cheeses are only 27 in. wide, and as premises and

the types -and sizes of products, lack uniformity, pallet loading has. been impracticable.

described Aplin and Barrett's transport system on July 3, 1953, have been highly successful, and Mr., George Yates, traffic manager, has extended 'them. in some instances night runs have been introduced.

As an example, the normal weekly schedule for the van services between Yeovil and Battersea. London. is now as follows:—

vans with 13attersea driver . and return to Yeovil. Tuesday, Yeovil to Swindon (via Frome and Westbury), .change over.

Over vans with Yeovil driver and return

via Woking and New Malden to Battersea. Tuesday, Battersea to Swindon,

change over and return via Newbury

The schedule for the South ,Wales No, 1 van service starts and finishes the week in Aberystwyth, and includes night tains with suitable changes of drivers.

Monday's run commences from Aberystwyth at 6 a.m. and ends at Newport (Mon.) after stopping at Cardiff. Leaving Newport at 3 a.m. on Tuesday it proceeds to Westbury, where it is used for local deliveries in the West Country. Then at 10 p.m. the same evening it is scheduled to leave Westbury for Newport, proceeding on to Cardiff and back to Newport for midday on Wednesday.

Thursday's running is a repeat of

Tuesday's Finally, at 8.3G a.m. on Friday the van leaves Newport for Cardiff. Swansea and Velindse en route for Aberystwyth, where it arrives at 6 p.m.

These are only two examples from many similar services. A complete alphabetical list of all depots is published, showing the days on which deliveries are made and the services by which they travel Pelonthly Cost Analysis Transport costs are closely watched and analysed monthly. As with many other large organizations distributing several commodities over a wide area, costing per individual journey would be impracticable. Charges to appropriate departments are raised on an agreed rate per ton, per commodity, having regard to the Ioadability of each. together with the area and the urgency of distribution.

noticed during my visit that Aplin and Barrett were nOt content withtheir own close analysis of operating costs, for the transport debits last year included the professional charges to Associated Industrial Consultantsfor the examination of the distribution system. S.B.