A new warehouse for J. and H. 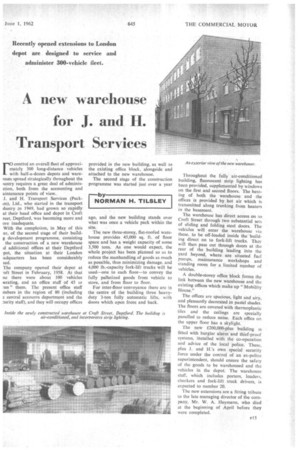 Page 89, 1st June 1962 — A new warehouse for J. and H.
Close
Noticed an error?
If you've noticed an error in this article please click here to report it so we can fix it.
Keywords : Manufacturing, Logistics, Supply Chain Management, Packaging, Pallet, Warehouse, Forklift Truck, Office, Deptford, The Warehouse Group

F0 control an overall fleet of approximately 300 long-distance vehicles with half-a-dozen depots and warefuses spread strategically throughout the entry requires a great deal of adminisition, both from the accounting and aintenance points of view.

J. and H. Transport Services (PeckLm), Ltd., who started in the transport dustry in 1949, had grown so rapidly at their head office and depot in Croft reet, Deptford, was becoming more and ore inadequate.

With the completion, in May of this ar, of the second stage of their buildg development programme, consisting the construction of a new warehouse td additional offices at their Deptford pot, the situation at their London adquarters has been considerably sed.

The company opened their depot at -oft Street in February, 1958. At that ne there were about 100 vehicles ferating, and an office staff of 45 to -un " them. The present office staff irnbers in the region of 80 (including f.. central accounts department and the :amity staff), and they will occupy offices

provided in the new building, as well as the existing office block, alongside and attached to the new warehouse.

[—by NORMAN H. TILSLEY I

ago, and the new building stands over what was once a vehicle park within the site.

The new three-storey, flat-roofed warehouse provides 45,000 sq. ft. of floor space and has a weight capacity of some 3,500 tons. As one would expect, the whole project has been planned so as to reduce the manhandling of goods as much as possible, thus minimizing damage, and 4,000 lb.-capacity fork-lift trucks will be used—one to each floor—to convey the fully palletized goods from vehicle to store, and from floor to floor.

For inter-floor conveyance there are in the centre of the building three heavyduty 3-ton fully automatic lifts, with doors which open front and back. Throughout the fully air-conditioned building, fluorescent strip lighting has been provided, supplemented by windows on the first and second floors. The heating of both the warehouse and the offices is provided by hot air which is transmitted along trun king from heaters in the basement.

The warehouse has direct access on to Croft Street through two substantial sets of sliding and folding steel doors. The vehicles will enter the warehouse via these, to be off-loaded inside the building direct on to fork-lift trucks. They will then pass out through doors at the rear of the building leading into the yard beyond, where are situated fuel pumps, maintenance workshops and standing room for a limited number of vehicles.

A double-storey office block forms thp link between the new warehouse and the existing offices which make up "Mobility House."

The offices are spacious, light and airy, and pleasantly decorated in pastel shades. The floors are covered with thermoplastic tiles and the ceilings are specially panelled to reduce noise. Each office on the upper floor has a skylight.

The new £200,000-plus building is fitted with burglar alarm and thief-proof systems, installed with the co-operation and advice of the local police. These, plus J. and H.'s own special security force under the control of an ex-police superintendent, should ensure the safety of the goods to be warehoused and the vehicles in the depot. The warehouse staff, which includes porters, loaders, checkers and fork-lift truck drivers, is expected to number 20.

The new extensions are a fitting tribute to the late managing director of the company, Mr. W. A. Heymann, who died at the beginning of April before they were completed.