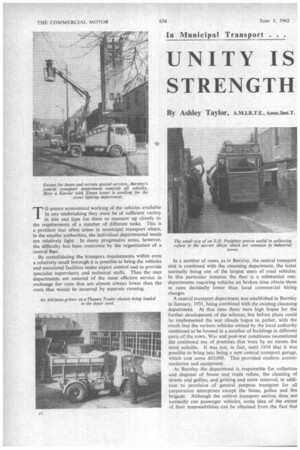 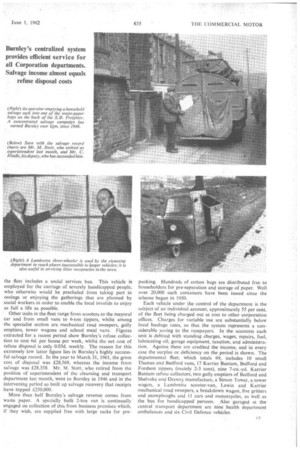 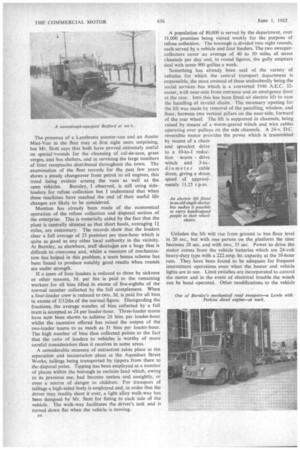 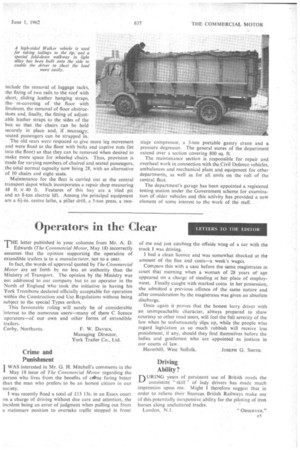 T0 ensure economical working of the vehicles available in any undertaking they must be of sufficient variety in size and type for them to measure up closely to the requirements of a number of different tasks. This is a problem that often arises in municipal transport where, in the smaller authorities, the individual departmental needs are relatively light. In many progressive areas, however, the difficulty has been overcome by the organization of a

By consolidating the transport requirements within even a relatively small borough it is possible to bring the vehicles and associated facilities under expert control and to provide specialist supervisory and technical staffs. Thus the user departments are ensured of the most efficient service in exchange fop rates that are almost always lower than the costs that would be incurred by separate running. In a number of cases, as in Bartt-lzy, the central transport unit is combined with the cleansing department, the latter normally being one of the largest users of road vehicles. In this particular instance the fleet is a substantial one; departments requiring vehicles on broken time obtain them at rates decidedly lower than local commercial hiring charges.

A central transport department was established in Burnley in January, 1931, being combined with the existing cleansing department. At that time there were high hopes for the further development of the scheme; but before plans could be implemented the war clouds began to gather, with the result that the various vehicles owned by the local authority continued to'be housed in a number of buildings in different parts of the town. War and post-war conditions necessitated the continued use of ,premises that were by no means the most suitable. It was not, in fact, until 1954 that it was possible to bring into being a new central transport garage, which cost some £63,000. This provided modern accommodation and equipment.

At Burnley the department is responsible for collection and disposal of house and trade refuse, the cleaning of streets and gullies, and gritting and snow removal, in addition to provision of general purpose transport for all corporation enterprises except the buses, police and fire brigade. Although the central transport section does not normally run passenger vehicles, some idea of the extent of their responsibilities can be obtained from the fact that

the fleet includes a social services bus. This vehicle is employed for the carriage of severely handicapped people, who otherwise would be precluded from taking part in outings or enjoying the gatherings that are planned by social Workers in order to enable the local invalids to enjoy as full a life as possible.

Other units in the fleet range from scooters to the mayoral car and from small vans to 6-ton tippers, whilst among the specialist section are mechanical road sweepers, gully emptiers, tower wagons and school meal vans: Figures extracted for a recent period show Burnley's refuse collection to cost 6d. per house per week, whilst the net cost of refuse disposal is only 0.03d. weekly. The reason for this extremely low latter figure lies in •Burnley's highly successful salvage record. In the year to March 31, 1961, the gross cost of disposal was £28,569, whereas the income from salvage was 128,358. Mr. M. Stott, who retired from the position of superintendent of the cleansing and transport department last month, went to Burnley in 1946 and in the intervening period so built up salvage recovery that receipts have topped £250,000.

More than half Burnley's salvage revenue comes from waste paper. A specially built 2-ton van is continually " engaged on collection of this from business premises which, if they wish, are supplied free with large sacks for pre

packing. Hundreds of co/ton bags are distributed free to householders for pre-separatiort and storage of paper. Well over 20.000 such containers have been issued since the scheme began in 1950.

Each vehicle under the control of the department is the subject of an individual account, approximately 55 per cent. of the fleet being charged out at cost to other corporation offices. Charges for variable 'use are substantially below local haulage rates, so that the system represents a considerable saving to the ratepayers. In' the accounts each unit is debited with standing charges, wages, repairs, fuel, lubricating oil, garage equipment, taxation, and administration. Against these are credited the income, and in every case the surplus or deficiency on the period is shown.. The departmental fleet, which totals 69, includes 10 small Thames and Bedford vans, 17 Karrier Bantam, Bedford and Fordson tippers (mainly 2-3 tons), nine 7-cu.-yd. Karrier Bantam refuse collectors, two gully emptiers of Bedford and Shelvoke and Drewry manufacture, a Simon Tower, a tower wagon, a Lambretta scooter-van, Lewin and Karrier mechanical road sweepers, a breakdown wagon, five gritters and snowploughs and 11 cars and motorcycles, as well as the bus for handicapped' persons. Also garaged at the central transport department are nine health department ambulances and six Civil Defence vehicles. The presence of a Lambretta scooter-van and an Austin Mini-Van in the fleet may at first sight seem surprising, but Mr. Stott says that both have proved extremely useful on special "'rounds for the cleansing of cul-de-sacs, grass verges, and bus shelters, and in servicing the large numbers of litter receptacles distributed throughout the town. The examination of the fleet records for the past few years shows a steady changeover from petrol to oil engines, this trend being evident among the vans as well as the

open vehicles. Burnley, I observed, is still using sideloaders for refuse collection but I understand that when these machines have reached the end of their useful life changes are likely to be considered.

Mention has already been made of the economical operation of the refuse collection and disposal section of the enterprise. This is materially aided by the fact that the plant is centrally situated so that short hauls, averaging 11 miles, are customary. The records show that the loaders clear a full average of 23 premises per man-hour which is quite as good as any other local authority in the vicinity. At Burnley, as elsewhere, staff shortaies are a bogy that is difficult to overcome and, whilst a measure of mechanization has helped in this problem, a team bonus scheme has been found to produce notably good results when rounds are under strength.

If a team of four loaders is reduced to three by sickness or other reasons, 3d. per bin is paid to the remaining workers for all bins lifted in excess of five-eighths of the normal number collected by the full complement. When a four-loader crew is reduced to two, 3d. is paid for all bins in excess of 5/12ths of the normal figure. Disregarding the fractions, the average number of bins collected by a full team is accepted as 24 per loader-hour. Three-loader teams have now been shown to achieve 26 bins per loader-hour whilst the incentive offered has raised the output of the two-loader teams to as much as 31 bins per loader-hour. The high number of bins thus collected points to the fact that the ratio of loaders to vehicles is worthy of more careful consideration than it receives in some areas.

A considerable measure of extraction takes place at the separation and incineration plant at the Aqueduct Street Works, tailings being transported by tippers from there to the disposal point. Tipping has been employed at a number of places within the borough to reclaim land which, owing to its previous use, had become useless and unsightly, or even a source of danger to children. For transport of tailings a high-sided body is employed and, in order that the driver may readily sheet it over, a light alloy walk-way has been designed by Mr. Stott for fitting to each side of the vehicle. The walk-way facilitates the driver's task and is turned down flat when the vehicle is moving.

A population of 80,000 is served by the department, over 31,000 premises being visited weekly for the purpose of refuse collection. The borough is divided into eight rounds, each served by a vehicle and four loaders. The two sweepercollectors cover an average of 40 to 50 miles of street channels per day and, in round figures, the gully emptiers deal with some 900 gullies a week.

Something has already been said of the variety of vehicles for which the central transport department is responsible, the most unusual of these undoubtedly being the social services bus which is a converted 1946 A.E.C. 32seater, with near-side front entrance and an emergency door at the rear. Into this has been fitted an electric lift to ease the handling of invalid chairs. The necessary opening for the lift was made by removal of the panelling, window, and floor, between two vertical pillars on the near-side, forward of the rear wheel. The lift is supported in channels, being raised by means of a worm-geared winch and wire cables operating over pulleys on the side channels. A 24-v. D.C. reversible motor provides the power which is transmitted by means of a chain and sprocket drive to a 10-to-1 reduc tion worm drive winch and 3-in.

Unladen the lift will rise from ground to bus floor level in 20 sec., but with one person on the platform the time becomes 28 sec. and with two, 35 sec. Power to drive the motor comes from the vehicle batteries which are 24-volt heavy-duty type with a 222 amp.-hr. capacity at the 10-hour rate. They have been found to be adequate for frequent intermittent operations even when the heater and vehicle lights are in use. Limit switches are incorporated to control the motor and in the event of electrical trouble the winch can be hand operated. Other modifications to the vehicle

include the removal of luggage racks, the fixing of two rails to the roof with short; sliding leather hanging straps, the, re-covering of the floor with linoleum, the removal of floor obstructions and, finally, the fitting of adjustable leather straps to the sides of the bus so that the chairs can be held securely in place and, if riecessaory, seated.passengers can be strapped in.

The old seats were respaced to give more leg movement and were fixed to the floor with bolts and captive nuts (let into the floor) so that they can be removed when desired to make more space for wheeled chairs. Thus, provision is made for varying numbers of chaired and seated passeners, the total normal capacity now being 28, with an alternative of 10 chairs and eight seats.

Maintenance for the fleet is carried out at the central transport depot which incorporates a repair shop measuring ,48 ft. x 40 ft. Features of this bay are a tiled pit and an 8-ton electric lift. Among the principal equipment are a 61-in. centre lathe, a pillar drill, a 5-ton press, a two stage compressor, a 3-ton portable gantry crane and a pressure degreaser. The general stores of the department extend over a section covering 800 sq. ft.

The maintenance section is responsible for repair and overhaul work in connection with the Civil Defence vehicles, ambulances and mechanical plant and equipment for other departments, as well as for all units on the roll of the central fleet.

The department's garage has been appointed a registered testing station under the Government scheme for examination of older vehicles and this activity has provided a new element of some interest to the work of the staff.