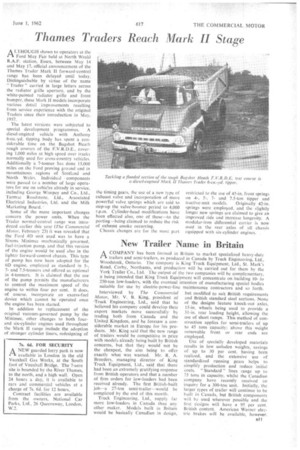 ALTHOUGH shown to operators at the Ford May Fair held at North Weald R.A.F. station, Essex, between May 14 and May 17, official announcement of the Thames Trader Mark II forward-control range has been delayed until today. Distinguishable by virtue of the name " Trader " carried in large letters across the radiator grille aperture, and by the white-painted radiator grille and front bumper, these Mark II models incorporate various detail improvements resulting from service experience with the original Traders since their introduction in May, 1957.

The latest versions were subjected to special development programmes. A diesel-engined vehicle with Anthony 6-cu.-yd. tipping body has spent a considerable time on the Bagshot Heath rough courses of the F.V.R.D.E., covering 1,000 miles at high speed over tracks normally used for cross-country vehicles. Additionally a 7-tonner has done 15,000 miles on the Ford proving ground and in mountainous regions of Scotland and North Wales. Individual components were passed to a number of large operators for use on vehicles already in service, including George Wimpey and Co., Ltd., Tarmac Roadstone, Ltd., Associated Electrical Industries, Ltd. and the Milk Marketing Board.

Some of the more important changes concern the power units. When the Trader normal-control range was introduced earlier this year (The Commercial Motor, February 23) it was revealed that the Ford 41) unit used was to have a Simms Minimec mechanically governed, fuel-injection pump, and that this version of the engine would be used also in the lighter forward-control chassis. This type of pump has now been adopted for the 6D engine, employed as standard in 5-, 7and 7.5-tanners and offered as optional

4-tonners. It is claimed that the use of the pump permits the manufacturers to control the maximum speed of the engine to within four per cent. It does, of course, incorporate an excess-fuel device which cannot be operated Once the engine has been started.

In addition to replacement of the original vacuum-governed pump by the Tvlinimec, other changes to both fourand six-cylinder engines used throughout the M'ark 11 range include the adoption of stronger cylinder liners, redesigning of the timing gears, the use of a new type of exhaust valve and incorporation of more powerful valve springs which are said to step-up the valve-bounce period to 4,000 r.p.m. Cylinder-head modifications have been effected also, one of these—to the porting—being claimed to reduce the risk of exhaust smoke occurring.

Chassis changes are for the most part restricted to the use of 45-in, front springs on 4-, 5-. 7and 7.5-ton tipper and tractive-unit model's. Originally 42-in. springs Were employed, and the slightly longer new springs are claimed to give an improved ride and increase longevity. A modular-iron differential carrier is now used in the rear axles of all chassis equipped with six-cylinder engines.