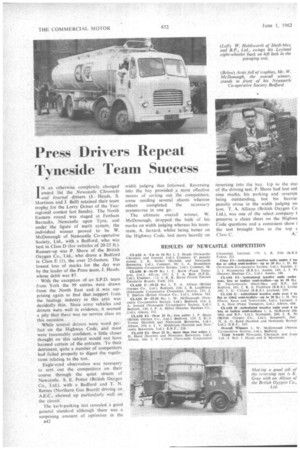 Page 110, 1st June 1962 — Press Drivers Repeat Tyneside Team Success
Close
Noticed an error?
If you've noticed an error in this article please click here to report it so we can fix it.
Keywords : Geography Of The United Kingdom, Local Government In England, Geography Of England, Newcastle Upon Tyne, Truck Driver, Bedford

IN an otherwise completely changed award list the Newcastle Chronicle and Journal drivers (J. Heads, S. Morrison and J. Bell) retained their team trophy for the Lorry Driver of the Year regional contest last Sunday. The North Eastern round was staged at Fenham Barracks, Newcastle upon Tyne, and under the figure of merit system, the individual winner proved to be W. McDonough of Newcastle Co-operative Society, Ltd., with a Bedford, who was best in Class D (for vehicles of 20-25 ft.). Runner-up was P. Shore of the British Oxygen Co., Ltd., who drove a Bedford in Class E (1), the over 25-footers. The lowest loss of marks for the day was by the leader of the Press team, J. Heads, whose debit was 87.

With the exception of an S,P.D. team from York the 99 entries were drawn from the North East and it was • surprising again to find that support from the haulage industry in this area was decidedly thin. Since army. vehicles and drivers were well in evidence, it seemed' a pity that there was no service class on this occasion.

While several drivers were word perfect on the Highway Code, and most were reasonably confident, a little closer thought on this subject would not have harmed certain of the entrants. To their detriment, quite a number of competitors had failed properly to digest the regulations relating to the test.

Eagle-eyed observation was necessary to sort out the competitors on. their course through the quiet streets of Newcastle. S. E. Potter (British Oxygen Co., Ltd.), with a Bedford and T. N. Barnes (Northern Gas Board) driving an A.E.C., showed up particularly well on the circuit.

The kerb-parking test revealed a good general standard although there was a surprising amount of optimism in the B42 width judging that followed. Reversing into the bay provided a most effective means of sorting out the competitors, some needing several shunts whereas others completed the necessary manceuvres in one go.

The ultimate overall winner, W. McDonough, dropped the bulk of his marks on width judging whereas his teammate, A. Jerrard, whilst being better on the Highway Code, lost more heavily on reversing into the bay. Up to the stai of the driving test, P. Shore had lost onl nine Marks, his parking and reversin being outstanding, but his heavie penalty arose in the width judging set tion. T. A. Allison (British Oxygen Co Ltd.), was one of the select company t preserve a clean sheet on the 'Highwa Code questions and a consistent show i the test brought him to the top Class C. A.'