Tractors to Operate in 35 Degrees Below 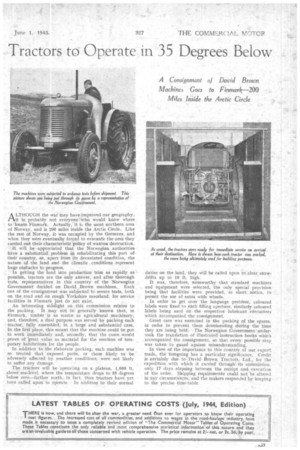 Page 35, 1st June 1945 — Tractors to Operate in 35 Degrees Below
Close
Noticed an error?
If you've noticed an error in this article please click here to report it so we can fix it.

ALTHOUGH the war may have improved our geography, it is probably not everyone who would know where to locate Finrnark. Actually, it it, the most northern area of Norway, and is 200 miles inside the Arctic Circle, Like the rest of Norway, it was occupied by the Germans, and when they were eventually forced to evacuat-e the area they carried out their characteristic policy of wanton destruction.

It will be appreciated that the Norwegian authorities have a substantial problem in rehabilitating this part of their country, as, apart from its devastated condition, the nature of the land and the climatic conditions represent huge obstacles to progress.

In getting the land into production trim as rapidly as possible, tractors are the only answer, and after thorough tests, repre,sentatives in this country of the Norwegian Government decided on David Brown machines. Each one of the consignment was subjected to severe tests, both on the, road and on rough Yorkshire moorland, for service facilities in Fin mark just do not exist.

An interesting sidelight on this commission relates to the packing. It may not be generally known that, in Yinmark, timber is as scarce as agricultural machinery, and, therefore, a dual purpose was served by packing each tractor, fully assembled, in a large and substantial case. In the first place, this meant that the machine could be put to work immediately and, secondly, that the cases would prove of 'great value as material for the erection of temporary habitations for the people.

In addition to the elaborate packing, each machine was so treated that exposed parts, or those likely to be adversely affected by weather conditions, were not likely to suffer any damage.

The tractors will be operating on .a plateau, 1,000 ft. above sea-level, where the temperatu-re drops to 35 degrees below zero—farther north, in fact, than tractors have yet been called upon to operate. • In addition to their normal

duties on the land, they will be called upon to clear snowdrifts up to 10 ft. high.

It was, therefore, noteworthy that standard machines and equipment were selected, the only special provision being that facilities were provided, at short notice, to permit the use of extra wide wheels. • In order to get over the language problem, coloured labels were fixed to each filling aperture, similarly coloured labels being used on the respective lubricant containers which accompanied the consignment.

Great care was exercised in the packing of the spares, in order to prevent them deteriorating during the time they are being held. The Norwegian Government undertook the translation of illustrated instruction books which accompanied the Consignment, so that every possible step was taken to guard against misunderstanding.

In view of the importance to this country of our export trade, the 'foregoing has a particular significance. Credit. is certainly due to David Brown Tractors, Ltd., for the expedition with which it carried throughits commission, only 17 days elapsing between the receipt and, execution of the order. Shipping requirements could not be altered in any circumstances, and the makers responded by keeping to the precise time-table.