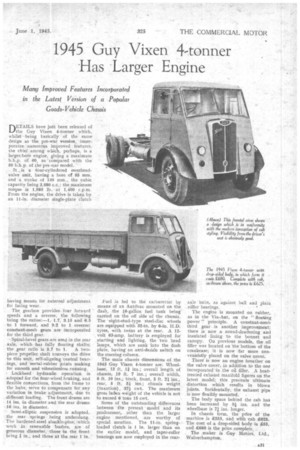 Page 33, 1st June 1945 — 1945 Guy Vixen 4-tonner Has Larger Engine
Close
Noticed an error?
If you've noticed an error in this article please click here to report it so we can fix it.
Keywords :

DETAILS have jutt been released of the Guy Vixen 4-tonner which, whilst being basically of the same design as the pee-war vernier', inuerporates numerous improved features, the chief among which, perhaps, is a larger-bore engine, giving a maximum b.h.p. of 60, as -compared with the 50 b.h.p. of the pre-war model.

The gearbox provides, four forward speeds and a reverse, the following being the 'ratios:—!,1,7, 3.15 and 6.5 to I forward, and 0.2 to 1 reverse; ccuistant-mesh gears are incorporated for the third gear.

.Spiral-bevel gears are used in the rear axle, which •has fully floating shafts;

the gear ratio is 5.7 to I. A twopiece propeller shaft conveys the drive to this unit, self-aligning. central bearings, and metal-rubber joints making for smooth and vibrationless running.

Lockheed hydraulic operation is adopted for the four-wheel braking, and flexible connections, from the frame to the hubs, serve to compensate for any variation in brake adjustment, -due to different loading. •The front drums are 14 ins, in diameter and the rear drums 16 ins. in diameter.

Semi-elliptic suspension is adopted, the rear springs being underslung. The hardened-steel shackle-pies, Which work in renewable bushes, are of generous diameter, those in the -front bring f in., and those at the rear 1 in. Fuel is fed to the carburetter by means of an Antdvac mounted on the dash, the 16-gallon fuel tank being carried on the off side of the chassis. The eight-stud-type steel-disc wheels are equipped with 32-in. by 6-in. 11.D. tyres, with twins at the rear. A 12_ volt 63-amp. battery is employed for starting • and lighting, the two head lamps, which are sunk into the dash plate, having an anti-daizie switch on the steering column.

Some of the outstanding differences between the present model and its predecessor, other than the larger engine mentioned, are worthy of special mention. The 11-in. springloaded clutch is 1 in. larger than on the earlier model, and taper-roller bearings are now employed in the rear axle hubs, as against ball and plain . roller bearings.

The engine is mounted on rubber, as in the Vix-Ant, on the " floating power" principle. A constant-mesh third gear is another improvement; there is now a sound-deadening and insulated lining to the bonnet and canopy. On previous models, the oil filler was located on 'the bottom of the crankcase; it is now far more conveniently placed on the valve cover.

Therf is now an engine breather on the valve cover, in addition to the one incorporated in the oil filler. A heattreated exhaust manifold figures on the latest model; this prevents ultimate distortion which results in blown joints. Incidentally, the exhaust pipe is now flexibly mounted,

The body space behind the cab has been increased by 91 ins, and the wheelbase is 71 ins. longer.