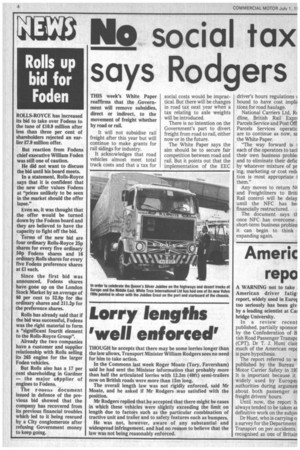 THOUGH he accepts that there may be some lorries longer than the law allows, Transport Minister William Rodgers sees no need for him to take action.

In the Commons last week Roger Moate (Tory, Faversham) said he had sent the Minister information that probably more than half the articulated lorries with 12.2m (40ft) semi-trailers now on British roads were more than 15m long.

The overall length law was not rigidly enforced, said Mr Moate, and he asked if Mr Rodgers was satisfied with the position.

Mr Rodgers replied that_he accepted that there might be cases in which these vehicles were slightly exceeding the limit on length due to factors such as the particular combination of tractive unit and trailer and to safety features such as bumpers.

He was not, however, aware of any substantial and widespread infringement, and had no reason to believe that the law was not being reasonably enforced.