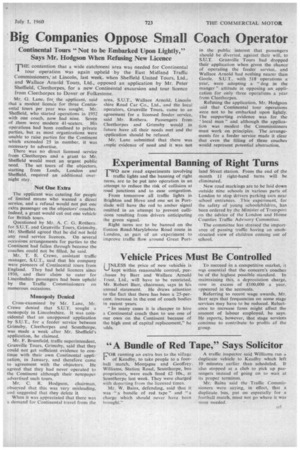 Page 71, 1st July 1960 — Experimental Banning of Right Turns
Close
Noticed an error?
If you've noticed an error in this article please click here to report it so we can fix it.

TW 0 new road experiments involving traffic lights and the banning of right turns, are to be put into operation in an attempt to reduce the risk of collision at road junctions and to ease congestion.

From tomorrow all traffic lights in Brighton and Hove and one set in Portslade will have the red to amber signal omitted in an attempt to prevent collisions resulting from drivers anticipating the green signal.

Right turns are to be banned on the Euston Road-Marylebone Road route in London, as part of an experiment to improve traffic flow around Great Port

land Street station. From the end of the month 11 right-hand turns will be eliminated.

New road markings are to be laid down outside nine schools in various parts of London to stop drivers parking cars near school entrances. This experiment, for the safety of young schoolchildren, has been ordered by the Minister of Transport on the advice of the London and Home Counties Traffic Advisory Committee.

The committee has stressed the importance of passing traffic having an unobstructed view of children coming out of school.