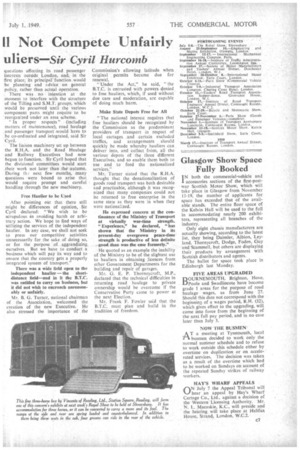 Page 5, 1st July 1949 — Glasgow Show Space • Fully Booked
Close
Noticed an error?
If you've noticed an error in this article please click here to report it so we can fix it.

IN both the commercial-vehicle and .1 accessories sections of the first-postwar Scottish Motor Show, which will take place in Glasgow from November 11-19, the number of applicants for space has exceeded that of the available stands. The entire floor space of the Kelvin Hall will be used to the full in accommodating nearly 200 exhibitors, representing all branches of the industry.

Only eight chassis manufacturers are actually showing, according to the latest list, they being Daimler, Albion, Leyland, Thornycraft, Dodge, Foden, Guy and Scammell, but others are displaying their products by arrangement with Scottish distributors and agents.

The ballot for space took place in Edinburgh last Monday.

BOURNEMOUTI-1, Brighton, Hove, Poole and Swadlincote have become grade 1 areas for the purpose of road haulage wages, as from June 27. Should this date not correspond with the beginning of a wages period, R.H. (32), which gives effect to the upgrading, will come into force from the beginning of the next full pay period, and in no case later than July 3.

.A T a meeting at Tynemouth, local

busmen decided to work only the normal surrimer schedule and to refuse to work outside this schedule either by overtime on duplication or on accelerated services. The decision was taken as a result of the overtime which had to be worked on Sundays on account of the repeated Sunday strikes of railway workers.

()N July 7 the Appeal Tribunal will hear an appeal by Hay's Wharf Cartage Co., Ltd., against a decision of the Western Licensing Authority. Mr. N. L Macaskie, K.C., will preside and the hearing will take place at Halifax House, Strand, London, W.C.2.