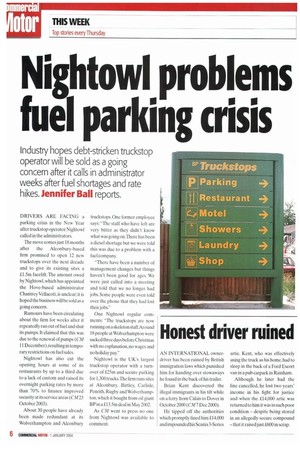 Industry hopes debt-stricken truckstop operator will be sold as a going concern after it calls in administrator weeks after fuel shortages and rate hikes. Jennifer Ball reports.

DRIVERS ARE FACING a parking crisis in the New Year after truckstop operator Nightowl called in the administrator& The move comes just 18 months after the Alconbury-based firm promised to open 12 new truckstops over the next decade and to give its existing sites a £1.5m facelift. The amount owed by Nightowl, which has appointed the Hove-based administrator Chantrey Vellacott, is unclear; it is hoped the business will be sold as a going concern.

Rumours have been circulating about the firm for weeks after it repeatedly ran out of fuel and shut its pumps. It claimed that this was due to the renewal of pumps (CM 11 December),resulting in temporary restrictions on fuel sales.

Nightowl has also cut the opening hours at some of its restaurants by up to a third due to a lack of custom and raised its overnight parking rates by more than 70% to finance improved security at its service areas (CM 23 October 2003).

About 30 people have already been made redundant at its Wolverhampton and Alconbury truckstops. One former employee says: "The staff who have left are very bitter as they didn't know what was going on. There has been a diesel shortage but we were told this was due to a problem with a fuel company.

-There have been a number of management changes but things haven't been good for ages. We were just called into a meeting and told that we no longer had jobs Some people were even told over the phone that they had lost their jobs."

One Nightowl regular comments: "The truckstops arc now running on a skeleton stafiAround 18 people at Wolverhampton were sacked three days before Christmas with no explanation, no wages and no holiday pay."

Nighlowl is the UK's largest truckstop operator with a turnover of 1_25m and secure parking for 1300 trucks. The firm runs sites at Akonbury. Birtley, Carlisle. Penrith. Rugby and Wolverhampton, which it bought from oil giant BP in a 1 3.5m deal in May 2002.

As CM went to press no one from Nightowl was available to comment.