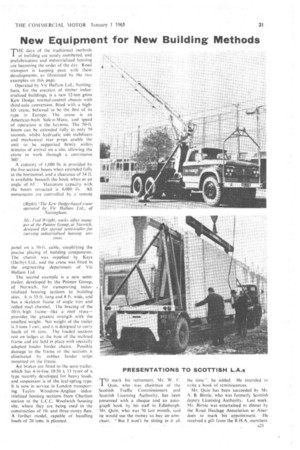 Page 23, 1st January 1965 — PRESENTATIONS TO SCOTTISH L.A.s
Close
Noticed an error?
If you've noticed an error in this article please click here to report it so we can fix it.
Keywords : The Mysterious Mr. Quin, Road Haulage Association, Edinburgh, Business / Finance, Politics

Quin, who was chairman of the Scottish Traffic Commissioners and Scottish Licensing Authority, has been presented with a cheque and. an autograph book by his staff in _Edinburgh. Mr. ()bin, who was 70 last month, said he would use the money to 134 an armchair._ `,..But I won't he sitting in it all the time he added. He intended to write a book of reminiscences.

Mr. Quin has been succeeded by Mr. A. B. Birnie, who was formerly Scottish deputy Licensing Authority. Last week. Mr. Birnie was entertained to dinner by the Road Haulage Association at Aberdeen to mark his appointment. He received a gift from the R.H.A. members.