S afety has always been the top priority for operators who 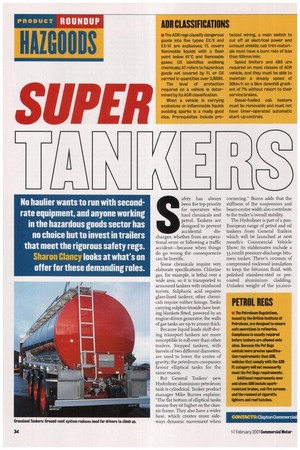 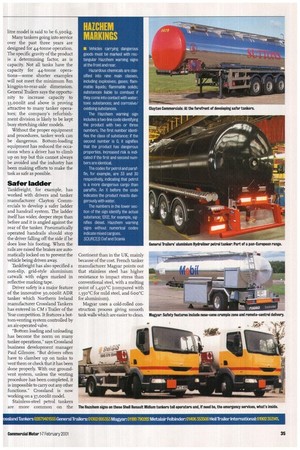 Page 36, 1st February 2001 — S afety has always been the top priority for operators who
Close
Noticed an error?
If you've noticed an error in this article please click here to report it so we can fix it.
Keywords : Technology, Transport, Oil Tanker, Tankers, Storage Tank, Aerial Refueling, Oil Depot, Water

haul chemicals and petrol. Tankers are designed to prevent accidental discharges, whether from an operational error or following a traffic accident—because when things do go wrong the consequences can be horrific.

Some chemicals require very elaborate specifications. Chlorine gas, for example, is lethal over a wide area, so it is transported in armoured tankers with reinforced turrets. Sulphuric add requires glass-lined tankers; other chemicals require rubber linings. Tanks carrying sulphur trioxide have heating blankets fitted, powered by an engine-driven generator; the walls of gas tanks are up to 20mm thick.

Because liquid loads shift during transport tankers are more susceptible to roll-over than other trailers. Stepped tankers, with barrels of two different diameters, are used to lower the centre of gravity; the petroleum companies favour elliptical tanks for the same reason.

But General Trailers' new Hydroliner aluminium petroleum tank is cylindrical. Tanker product manager Mike Burnes explains: "The flat bottom of elliptical tanks means they sit higher on the chassis frame. They also have a wider base, which creates more sideways dynamic movement when

cornering," Burns adds that the stiffness of the suspension and beam-centre width also contribute to the trailer's overall stability.

The Hydroliner is part of a panEuropean range of petrol and oil tankers from General Trailers which will be launched at next month's Commercial Vehicle Show; its stablemates include a 33,000lit pressure-discharge bitumen tanker. There's roomm of compressed rockwool insulation to keep the bitumen fluid, with polished stainless-steel or precoated aluminium cladding. Unladen weight of the 3o,000

Many tankers going into service over the past three years are designed for 44-tonne operation. The specific gravity of the product is a determining factor, as is capacity. Not all tanks have the capacity for 44-tonne operations—some shorter examples will not meet the minimum 8m kingpin-to-rear-axle dimension. General Trailers says the opportunity to increase capacity to 33,000lit and above is proving attractive to many tanker operators; the company's refurbishment division is likely to be kept busy stretching older models.

Without the proper equipment and procedures, tanker work can be dangerous. Bottom-loading equipment has reduced the occasions when a driver has to climb up on top but this cannot always be avoided and the industry has been making efforts to make the task as safe as possible.

Tankfreight, for example, has worked with drivers and tanker manufacturer Clayton Commercials to develop a safer ladder and handrail system. The ladder itself has wider, deeper steps than before and it is angled against the rear of the tanker. Pneumatically operated handrails should stop the driver falling off the side if he does lose his footing. When the rails are raised the brakes are automatically locked on to prevent the vehicle being driven away.

Driver safety is a major feature of the innovative 3o,000lit ADR tanker which Northern Ireland manufacturer Crossland Tankers has entered in CM s Trailer of the Year competition. It features a bottom-venting system controlled by an air-operated valve.

"Bottom loading and unloading has become the norm on many tanker operations," says Crossland business development manager Paul Gilmore. "But drivers often have to clamber up on tanks to vent them or check that it has been done properly. With our groundvent system, unless the venting procedure has been completed, it is impossible to carry out any other functions." Crossland is now working on a 37,000lit model.

Stainless-steel petrol tankers are more common on the Continent than in the UK, mainly because of the cost. French tanker manufacturer Magyar points out that stainless steel has higher resistance to impact stress than conventional steel, with a melting point of 1,450°C (compared with 1,35o°C for mild steel, and 6 oo°C for aluminium).