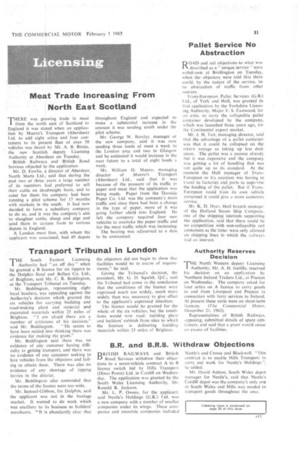 Authority had "an off day" when he granted a B licence for six tippers to the Dolphin Sand and Ballast Co: Ltd., of Brighton, said Mr. C. R. Beddington, at the Transport Tribunal on Tuesday. Mr. BeddingtO, representing eight local hauliers, was appealing against the Authority's decision which granted the six vehicles for carrying building and road-making plant and material and excavated materials within 25 miles of Brighton. "I am afraid there are a number of criticisms of his decision," said Mr. Beddington, He seems to have been misled into thinking there was evidence for making the grant."

Mr. Beddington said there was no evidence of any customer having difficulty in getting transport, and there was no evidence of any customer seeking to hire vehicles from the objectors and failing to obtain them. There was also no evidence of any shortage of tipping lorries in the district, Mr. Beddington also contended that the terms of the licence were too wide, Mr. Samuel-Gibbon, for Dolphin, said the applicant was not in the haulage market. It wanted to do work which was ancillary to its business as builders' merchants. " It is abundantly clear that the objectors did not begin to show that facilities would be in excess of requirements," he said. Giving the Tribunal's decision, the president, Mr. G. D. Squibb, 0.C., said the Tribunalhad come to the conclusion that the conditions of the licence were expressed much too widely, much more widely than was necessary to give effect bet the applicant's expressed intention.

The licence would be granted for the whole of the six vehicles, but the conditions would now read: building plant and builders' rubbish from sites to which the licensee is delivering building materials within 25 miles of Brighton.