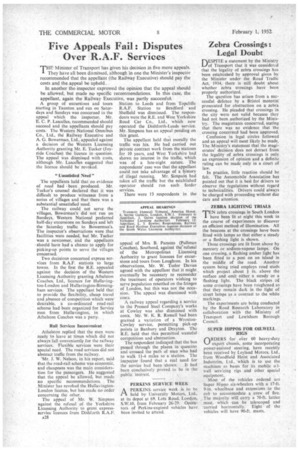 Page 30, 1st February 1952 — Zebra Crossings : • Legal Doubt
Close
Noticed an error?
If you've noticed an error in this article please click here to report it so we can fix it.

DESPITE a statement by the Ministry of Transport that it was considered that the legality of zebra crossings has been established by approval given by: the Minister under the Road Traffic Act, 1934, there is still doubt about whether zebra crossings have been properly authorized.

The question has arisen from a successful defence by a Bristol motorist prosecuted for obstruction on a zebra crossing. He pleaded that crossings in the city were not valid because they had not been authorized by the Ministry. The magistrates concurred, stating that there was no evidence that the crossing concerned had been approved.

Confusion in legal circles followed and an appeal will most likely be made. 'the Ministry's statement that the magistrates' decision does not detract from the legality of zebra crossings is only an expression of opinion and a definite ruling can be made only in a court of law.

In practice, little reaction should be felt. The Automobile Association has pointed out that it is best for drivers to observe the regulations without regard to technicalities. Drivers could always be charged with proceeding without due care and attention.

TEN zebra crossings in South London have been lit at night this week in the course of experiments to discover an efficient method of illumination. All the beacons at the crossings have been fitted with lamps so that either a steady or a flashing light is shown.

Three crossings are lit from above by mercury or sodium-vapour lamps. On one crossing, a flashing amber light has been fitted to a post on an island in the middle of the road. Another system being tried employs road studs which project about Iin. above the surface and emit either a steady or a flashing light. The black stripes of some crossings have been roughened so that they remain dark in the light of street lamps as a contrast to the white markings.

The experiments are being conducted by the Road Research Laboratory in collaboration with the Ministry of Transport and Lewisham Borough Council.

ORIDERS for oiser 60 heavy-duty export chassis, some incorporating power-assisted steering, have recently been received by Leyland Motors, Ltd., from Woodfield Hoist and Associated Industries, Ltd., which is to use the machines as bases for its mobile o1well servicing rigs and other special equipment.

Most of the vehicles ordered are Super Hippo six-wheelers with a 17-ft. 9-in, wheelbase and extensions to the cab to accommodate a crew of five. The majority will carry a 70-ft. lattice mast, which can be telescoped and -carried horizontally. Eight of the vehicles will have 90-ft. masts.