THE BOFFIN'S CONTRIBUTION TO EFFICIENCY 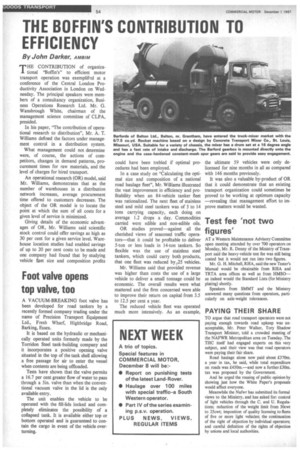 Page 56, 1st December 1967 — THE BOFFIN'S CONTRIBUTION TO EFFICIENCY
Close
Noticed an error?
If you've noticed an error in this article please click here to report it so we can fix it.
Keywords : Tank Ship, Fleet Vehicle, Business / Finance

By John Darker, AMBIM THE CONTRIBUTION of organizational 'Boffin's" to efficient motor transport operation was exemplifi-xl at a conference of the Central London Productivity Association in London on Wednesday. The principal speakers were members of a consultancy organization, Business Operations Research Ltd. Mr. G. Wansbrough White, chairman of the management science committee of CLPA, presided.

In his paper, The contribution of operational research to distribution", Mr. A. T. Williams defined the factors under management control in a distribution system.

What management could not determine were, of course, the actions of competitors, changes in demand patterns, procurement times for raw materials, and the level of charges for hired transport.

An operational research (012) model, said Mr. Williams, demonstrates that as the number of warehouses in a distribution network increases, average procurement time offered to customers decreases. The object of the OR model is to locate the point at which the sum of all costs for a given level of service is minimized.

Giving details of the economic advantages of OR, Mr. Williams said scientific stock control could offer savings as high as 30 per cent for a given service level. Warehouse location studies had enabled savings of up to 20 per cent costs to be made and one company had found that by studying vehicle fleet size and composition profits could have been trebled if optimal procedures had been employed.

In a case study on ``Calculating the optimal size and composition of a national road haulage fleet", Mr. Williams illustrated the vast improvement in efficiency and profitability when an 84-vehicle tanker fleet was rationalized. The next fleet of stainless steel and mild steel tankers was of 5 to 14 tons carrying capacity, each doing on average 1.2 drops a day. Commodities carried were edible and non-edible oils.

OR studies proved—against all the cherished views of seasoned traffic operators—that it could be profitable to deliver 5-ton or less loads in 14-ton tankers. So flexible was the use of stainless steel tankers, which could carry both products, that one fleet was reduced by ,25 vehicles.

Mr. Williams said that provided revenue was higher than costs the use of a large vehicle to deliver a small tonnage could be economic. The overall results were what mattered and the firm concerned were able to improve their return on capital from 3.5 to 12.5 per cent a year.

The reduced vehicle fleet was operated much more intensively. As an example,

the ultimate 59 vehicles were only delicensed for nine months in all as compared with 146 months previously.

It was also a valuable by-product of OR that it could demonstrate that an existing transport organization could sometimes be proved to be working at optimum capacity —revealing that management effort to improve matters would be wasted.