WHEELS of INDUSTRY "The wheels of wealth will be slowed 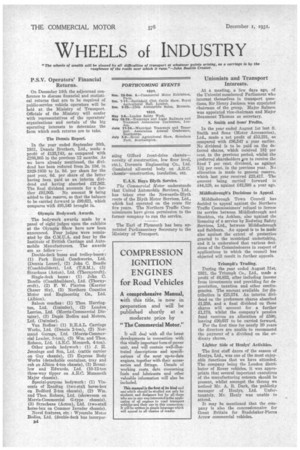 Page 38, 1st December 1931 — WHEELS of INDUSTRY "The wheels of wealth will be slowed
Close
Noticed an error?
If you've noticed an error in this article please click here to report it so we can fix it.
Keywords : Buses, Northern Counties, Plaxton, Thornycroft, Dividend, Dennis Lance, Double-decker Buses, Business / Finance

by all difficulties of transport at whatever points arising, as a carriage is by the roughness of the roads over which it runs."—John Beattie Crosier.

On December 14th the adjourned conference to discuss financial and statistical returns that are to be required of public-service vehicle operators will be held at the Ministry of Transport. Officials of the Ministry will confer with representatives of the operators' organizations and certain of the big operating interests to determine the form which such returns are to take.

The bodywork awards made by a panel of eight judges upon the exhibits at the Olympia Show have now been announced. Four judges were nominated by the C.M.U.A. and four by the Institute of British Carriage and Automobile Manufacturers. The awards are as follow :— Double-deck buses and trolley-buses: (1) Park Royal Coachworks, Ltd. (Dennis Lance), (2) John C. Beadle (Coaehbuilders), Ltd. (T.S.M.), (3) Strachans (Acton), Ltd. (Thornycroft).

The Commercial Motor understands that United Automobile Services, Ltd., has taken over the Newcastle-Blyth route of the Blyth Motor Services, Ltd., which had operated on the route for five years. The Northern Traffic Commissioners have given permission to the former company to run the service.

The Earl of Plymouth has been appointed Parliamentary Secretary to the Ministry of Transport.

At a meeting, a few days ago, of the Unionist membersof Parliament who interest themselves in transport questions, Sir Henry Jackson was appointed chairman of the group. Major Salmon was appointed vice-chairman and Major Beaumont Thomas as secretary.

In the year ended August 1st last S. Smith and Sons (Motor Accessories), Ltd., made a net profit of £53,231, as compared with £96,547 a year earlier. No dividend is to be paid on the deferred shares, which received 181 per cent, in the previous period, whilst the preferred shareholders 0.re to receive the fixed 7 per cent. dividend, as against 12i per cent, in the previous year. No allocation is made to general reserve, which last year received £23,417. .The amount being carried forward is £44,329, as against £42,598 a year ago.

Middlesbrough Town Council has decided to appeal against the Northern Traffic Commissioners' refusal to license its service between Middlesbrough and Stockton, via Acklam, also against the licensing of a service by Redwing Safety Services, Ltd., between Middlesbrough and Saltburn. An appeal is to be made also against the extent of protection granted to the municipal undertaking, and it is understood that various decisions of the Commissioners in respect of applications to which the council has objected will result in further appeals.

During the year ended August 31st, 1931, the Triumph Co., Ltd., made a profit of £6,852, after including income from investments and providing for depreciation, taxation and other contingencies. The amount available for distribution is £23,574. An interim dividend on the preference shares absorbed £1,259, and a final dividend on those shares will account for a further £1,178, whilst the company's pension fund receives an allocation of £500, leaving £20,637 to be carried forward.

For the first time for nearly 30 years the directors are unable to recommend the payment of a dividend on the ordinary shares.

Lighter Side of Henlys' Activities.

The first staff dance of the season of Henlys, Ltd., was one of the most enjoyable functions that we have attended. The company being the London distributor of Rover vehicles, it was appropriate that several important executives of the manufacturing concern should be present, whilst amongst the throng we noticed Mr. A. R. Dark, the publicity manager of Henlys, Ltd. Unfortunately, Mr. Eerily was unable to attend.

It may be mentioned that the company is also the concessionnaire for Great Britain for Studebaker-Pierce Arrow commercial vehicles.