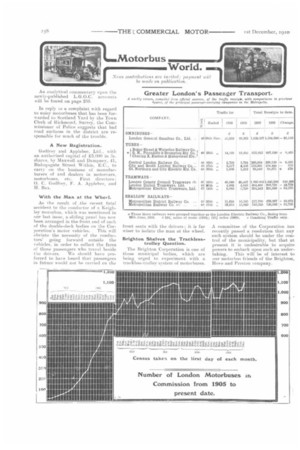 Page 6, 1st December 1910 — Motorbus World.
Close
Noticed an error?
If you've noticed an error in this article please click here to report it so we can fix it.
Keywords : Bishopsgate, Hanseatic League, Tram

An analytical commentary upon the newly-published L.G.O.C. accounts will be found on page 259.

In reply to a complaint with regard to noisy motorbuses that has been forwarded to Scotland Yard by the Town Clerk of Richmond, Surrey, the Commissioner of Police suggests that bad road surfaces in the district are responsible fur much of the trouble.

Godfrey and Applebee, Ltd., with an authorized capital of it5,000 in 5s. shares, by Maxwell and Dampney, 41, Bishopsgate Street Within, EC., to carry on the business of manufacturers of and dealers in motorcars, motorbuses, etc. First directors: 0. C. Godfrey, F. A. Applebee, and H. Bas.

With the Man at the Wheel.

As the result of ,the recent fatal accident to the conductor of a Keighley motorbus, which was mentioned in our last issue, a sliding panel has now been arranged in the front end of each of the double-deck bodies on the Cor poration's motor vehicles. This will obviate the necessity of the conductors' going forward outside the vehicles, in order to collect the fares of those passengers who travel beside

the drivers. We should have preferred to have heard that passengers in future would not be carried on tile

front seats with the drivers; it is far wiser to isolate the than at the wheel.

The Brighton Corporation is one of those moo icipal bodies, which are being urged to experiment with a trackles-trolley system of motorbuses.

A committee of the Corporation has recently passed a resolution that any' such system should be under the control of the municipality, but that at present it is undesirable to acquire powers to embark upon such an under

taking. This will be of interest to our motorbus friends of the Brighton, Hove and Preston company.