Reaping what you sow A CORBY HAULAGE director has been 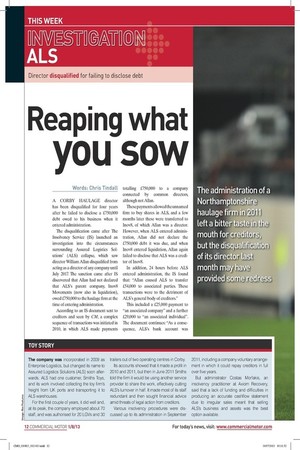 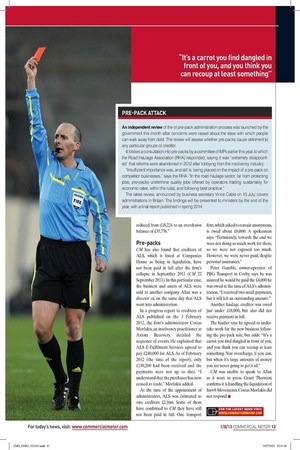 Page 9, 1st August 2013 — Reaping what you sow A CORBY HAULAGE director has been
Close
Noticed an error?
If you've noticed an error in this article please click here to report it so we can fix it.

disqualified for four years after he failed to disclose a £750,000 debt owed to his business when it entered administration.

The disqualification came after The Insolvency Service (IS) launched an investigation into the circumstances surrounding Assured Logistics Solutions' (ALS) collapse, which saw director William Allan disqualified from acting as a director of any company until July 2017 The sanction came after IS discovered that Allan had not declared that ALS's parent company, Inov8 Movements (now also in liquidation), owed £750,000 to the haulage firm at the time of entering administration.

According to an IS document sent to creditors and seen by CM, a complex sequence of transactions was initiated in 2010, in which ALS made payments totalling £750,000 to a company connected by common directors, although not Allan.

These payments allowed the unnamed firm to buy shares in ALS, and a few months later these were transferred to Inov8, of which Allan was a director. However, when ALS entered administration, Allan did not declare the £750,000 debt it was due, and when Inov8 entered liquidation, Allan again failed to disclose that ALS was a creditor of Inov8.

In addition, 24 hours before ALS entered administration, the IS found that: "Allan caused ALS to transfer £54,000 to associated parties. These transactions were to the detriment of ALS's general body of creditors."

Pre-packs CM has also found that creditors of ALS, which is listed at Companies House as being in liquidation, have not been paid in full after the firm's collapse in September 2011 (CM 22 September 2011). In this particular case, the business and assets of ALS were sold to another company Allan was a director of, on the same day that ALS went into administration.

In a progress report to creditors of ALS published on the 3 February 2012, the firm's administrator Costas Morfakis, an insolvency practitioner at Axiom Recovery, detailed the sequence of events. He explained that ALS E-Fulfilment Services agreed to pay £240,000 for ALS. As of February 2012 (the time of the report), only £150,200 had been received and the payments were not up to date. "I understand that the purchaser has now ceased to trade," Morfakis added.

At the time of the appointment of administrators, ALS was estimated to owe creditors £2.16m. Some of them have confirmed to CM they have still not been paid in full. One transport firm, which asked to remain anonymous, is owed about £6,000. A spokesman says: "Fortunately, towards the end we were not doing so much work for them, so we were not exposed too much. However, we were never paid, despite personal assurances."

Peter Gamble, owner-operator of PBG Transport in Corby, says he was assured he would be paid the £4,000 he was owed at the time of ALS's administration. "I received two small payments, but it still left an outstanding amount."

Another haulage creditor was owed just under £18,000, but also did not receive payment in full.

The haulier says he agreed to undertake work for the new business following the pre-pack sale, but adds: "It's a carrot you find dangled in front of you, and you think you can recoup at least something. You overcharge, if you can, but when it's large amounts of money you are never going to get it all."

CM was unable to speak to Allan as it went to press. Grant Thornton confirms it is handling the liquidation of Inov8 Movements. Costas Morfakis did not respond. •