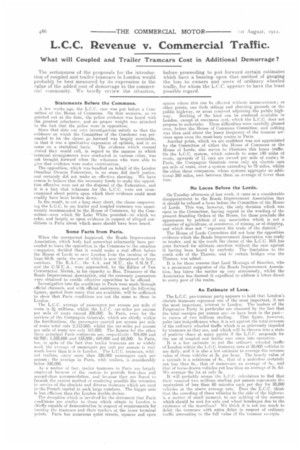 Page 4, 1st August 1912 — L.C.C. Revenue v. Commercial Traffic.
Close
Noticed an error?
If you've noticed an error in this article please click here to report it so we can fix it.
Keywords : Light Rail, Tram, Nottingham, Trams In London

What will Coupled and Trailer Tramcars Cost in Additional Demurrage?

The seiiousness of the proposals for the introduction of coupled and trailer tramcars in London would probably be best measured by its expression in the value of the added cost of demurrage to the commercial community. We briefly review the situation,

before proceeding to put forward certain estimates which have a bearing upon that method of gauging the loss to owners and users of ordinary wheeled traffic, for wham the L.C.C. appears to have the least possible regard.

Statements Before the Commons.

A few weeks ago, the L.C.C. case was put before a Cuminittee of the House of Commons. On that occasion, as we pointed out at the time, the police evidence was heard with the greatest reluctance, and no proper weight was attached to the fact that the police were in opposition. Since that date our own investigations satisfy us that the evidence on which the Committee of the Commons was persuaded to let the clause go forward was largely unreliable, in that it was a qualitative expression of opinion, and in no sense on a statistical basis. The evidence which counsel atated they would call, in regard to the manner in which ' terminal arrangements were conducted in various cities, was not brought forward when the witnesses who were able to give that evidence were under examination.

The opposition, which was handled on behalf of the London Omnibus Owners Federation, in no sense did itself justice, and certainly did not make an effective showing. We have reason to believe that the necessary funds to make the opposition effective were not at the disposal of the Federation, and it is a fact that witnesses for the L.C.C. were not crossexamined about points upon which their evidence could most readily have been broken dawn. In the result, to cut a. long story short, the clause empowering the L.C.C. to use trailer and coupled tramcars was unanimously recommended to the House of Commons, by the Committee—over which Sir Luke White presided—to which we refer, and largely so upon evidence in respect of alleged conditions in Paris about which more should have been heard.

Some Facts from Paris.

When the unexpected happened, the Roads Improvement Association, which body had somewhat reluctantly been persuaded to leave the opposition in the Commons to the omnibus companies, decided that it would make a real effort before the House of Lords to save London from the incubus of the huge 68-ft. units, the use of which is now threatened in large 'lumbers, The RAC., the A. A. and MU., the S.M.M.T., and the C.M.U.A., were approached, by the Editor of THE COMMERCIAL MOTOR, in his capacity as Hon. Treasurer of the 'Roads Improvement. Association, and the necessary guarantees were obtained to enable effective opposition to be offered. Investigation into the conditions in Paris were made through official channels, and with official assistance, and the following figures, quoted from many that are available, will be sufficient to show that Paris conditions are not the same as those in London.

As a matter of fact, trailer tramears in Paris are largely employed because of the custom to providee, first-class and second-class accommodation, and because they are found to furnish the easiest method of Tendering possible the retention in service, of the obsolete and diverse tramcars which are used in the French capital in such large numbers. The bigger unit is less efficient than the London double-decker.

The deception which is involved by the statement that Paris conditions are similar to those which obtain in London is chiefly capable of demonstration in respect of requirements for turning the tramcars and their trailers at the inner terminal points. Paris has numerous quiet streets, squares and open spaces where this can be effected without inconveniences as other points, one finds sidings and shunting grounds on the public highway, or areas reserved adjoining the public high way. Nothing of the kind can be rendered available in London, except at enormous cost, which the L.C.C. does not propose to undertake. These difficulties were carefully glossed over, before the House of Commons Committee, and nothing was then said about the lesser frequency of the tramcar services upon even the most-busy routes in Paris. Another point, which we are confident was not appreciated by the Committee of either the House of Commons or the House of Lords, also serves to illustrate this lesser traffic. On the L.C.C. system, which extends to some 140 miles of route, upwards of 11 cars are owned per mile of route; in Paris, the Compagnie Generale owns only six electric cars pee mile of route, over a system extending to 75 miles, whilst the other three companies, whose systems aggregate an additional 260 miles, own between them an average of fewer than four.

No Locus Before the Lords.

On Tuesday afternoon of last week, it came as a considerable disappointment to the Roads Improvement Association that it should be refused a locus before the Committee of the House of Lords. This was, however, the only decision which was open to the Committee, having regard to the wording of the present Standing Orders of the House, for these preclude the appearance by petition of any association which is not a chamber of agriculture, of commerce, of mining, or of shipping, and which does not " represent the trade of the district." The House of Lords Committee did not hear the opposition evidence which the Roads Improvement Association was ready to tender, and in the result the clause of the L.C.C. Bill has gone forward for ultimate sanction without the case against it having been heard by anybody. The limitation to the south side of the Thames, and to certain bridges over the Thames, was added.

It is for these reasons that Lord Montagu of Beanlieu, who is a prominent supporter of the Roads Improvement Association, has taken the matter up very strenuously, whilst the Association has deemed it expedient to address a letter direct to every peer of the realm.

An Estimate of Loss.

The L.C.C. pro-tramcar party appears to hold that London's electric tramcars represent one of the most, important, if not the most important, interest in London, The leaders of the Progressive Party in particular are obsessed by the fact that the total receipts per annum are—or have been in the past— in excess of two millions sterling. That figure. however, pales into insignificance when it is set against the total revenue of the ordinary wheeled traffic which is so grievously impeded by tramcars as they are, and which will be thrown into a state of positive chaos at many points if the L.C.C. proposals for the use of coupled and trailer cars come into operation.

It is a low estimate to put the ordinary wheeled traffic of London within the L.C.C. tramway area at 50,000 vehicles in use daily, and it is also a low estimate to average the revenue value of these vehicles at 3s. per hour. The honrly value of a taxicab is a minimum of 4s., that of a motorbus certainly not less than 6s., that of .moturvans an average of 4s., and that of horse-drawn vehicles rot less than an average of 2s. 6d. We average the lot at only 3s. It will probably amaze the LUG. calculators to find that their vaunted two millions sterling per annum represents the equivalent of less than 60 minutes each per day for 50,000 vehicle; at the above average rate. Does the L.C.C. think that the crowding of these vehicles to the side of the highway is a matter of small moment, to say nothing of the account which should be met for axle and wheel breakages due to the existence of the tramlines? We think it is not ton much to debit the tramcars with extra delay in respect of ordinary traffic amounting to the full value of the tramcar receipts.