One union will give P. and I. evidence 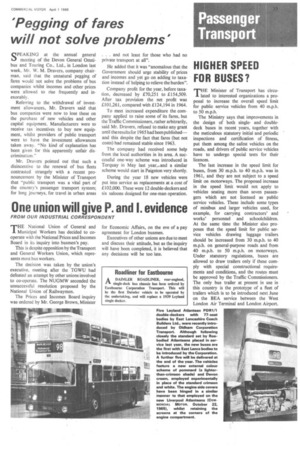 Page 35, 1st April 1966 — One union will give P. and I. evidence
Close
Noticed an error?
If you've noticed an error in this article please click here to report it so we can fix it.
Keywords : Workers' Union, Scottish Busmen's Union, Labor, Politics

THE National Union of General and Municipal Workers has decided to cooperate with the National Prices and Incomes Board in its inquiry into busmen's pay.

This is despite opposition by the Transport and General Workers Union, which represents most bus workers.

The decision was taken by the union's executive, meeting after the TGWU had defeated an attempt by other unions involved to co-operate. The NUGMW seconded the unsuccessful resolution proposed by the National Union of Railwaymen.

The Prices and Incomes Board inquiry was ordered by Mr. George Brown, Minister for Economic Affairs, on the eve of a pay agreement for London busmen.

Executives of other unions are due to meet and discuss their attitude, but as the inquiry will have been completed, it is believed that any decisions will be too late.