T HE inaugural meeting of the London and Home Counties Area 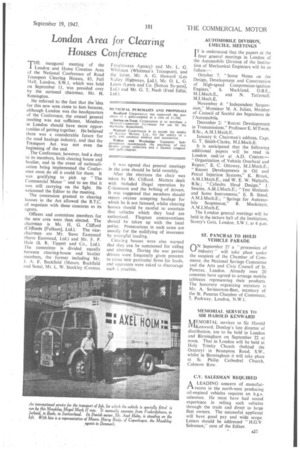 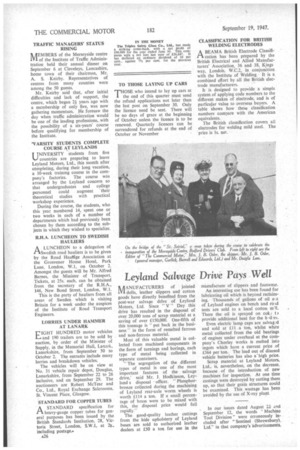 Page 27, 19th September 1947 — T HE inaugural meeting of the London and Home Counties Area
Close
Noticed an error?
If you've noticed an error in this article please click here to report it so we can fix it.
Keywords : Haulage, Truck, Leyland Motors

of . the National Conference of Road Transport Clearing Houses, 83, Pall Mall, London, S.W.1, which was held on September 11, was presided over by the national chairman, Mr. H. Rossington.

He referred to the fact that the 'idea for this new area came to him because, although London was the headquarters of the Conference, the annual general meeting was not sufficient. Members in London should have more opportunities of getting together. He believed there was a considerable future for the road haulage industry, and that the Transport Act was not even the beginning of the end.

The Conference, however, had a duty to its members, both clearing house and haulier, and in the event of nationalization being implemented the Conference must do all it could for them. It was gratifying to pick up "The Commercial Motor" and to see that it was still carrying on the fight. He welcomed the Editor to the meeting.

The concession granted to clearing houses in the Act allowed the B.T.C. Ls negotiate with these concerns as its agents.

It was agreed that general meetings in the area should be held monthly.

After the elections the chair was taken by Mr. Clifford. Matters dealt with included illegal operation by C-licensees and the bribing of drivers. It was suggested that members should report anyone accepting haulage for which he is not licensed, whilst clearing houses should be careful to ascertain that vehicles which they load are authorized. Flagrant contraventions should be taken up with the local police. Prosecutions in such cases are usually for the nullifying of insurance by wrongful loading.

Clearing houses were also warned that they can be summoned for aiding and abetting. During the war period drivers were frequently given presents to come into particular firms for loads, and operators were asked to discourage such a practice. AUTOMOBILE DIVISION, LMECFLE. MEETINGS

I T is understood that the papers at the four general meetings in London of the Automobile Division of the Institution of Mechanical Engineers will be as f ollow:—

The London general meetings will be held in the lecture hall of the Institution, 'Storey's Gate, London. S.W I, at 6 p.m.

ON September 27 a " procession of

industry 'S will take place under the auspices of the Chamber of Commerce, the National Savings Committee and the Arts and Civic Council of St. Pancras, London. Already over 20 concerns have agreed to arrange mobile tableaux representing their products. The honorary organizing secretary is Mr. A. Swinnerton-Beet, secretary of the St. Pancras Chamber of Commerce. 7, Parkway, London, N.W.I.

MEMORIAL SERVICES TO SIR HAROLD KENWARD NAEMORIAL services to Sir Harold IV1Kenward, Dunlop's late director of distribution, are to be held in London and Birmingham on September 22 at noon. That in London will be held at Holy Trinity Church (behind the Oratory) • in Brompton Road, S.W., whilst in Birmingham it will take place at St. Philip Cathedral Church, Colmore Row.

ALEADING concern of mantifacturers in the north-west producing oil-engined vehicles requires an h.g.v. salesman. He must have had sound experience in selling such vehicles through the trade and direct to large fleet owners. The successful applicant will have good pay and wide scope. Letters should be addressed " H.G.V. Salesman," care of the Editor.

TRAFFIC MANAGERS' STATUS RISING lk/TEMBERS of the Merseyside centre IVI of the Institute of Traffic Administration held their annual dinner on September 6 at Cleveleys, Lancashire, home town of their chairman, Mr. A. S. Keirby. Representatives of centres from many counties were among the 50 guests.

Mr. Keirby said that, after initial difficulties and lack of support, the centre, which began 2i years ago with a membership of only five, was now gathering momentum. He foresaw the day when traffic administration would be one of the leading professions, with the possibility of a six-years' course before qualifying for membership of the Institute.

UTNIVERSITY students from five %.,/ countries are preparing to leave Leyland Motors, Ltd., this month after completing, during their long vacation, a 10-week training course in the company's factories. The course was arranged by the Leyland concern so that undergraduates and college personnel could augment their theoretical studies with practical workshop experience.

During the course, the students, who this year numbered 14, spent one or two weeks in each of a number of departments which had previously been chosen by them according to the subjects in which they wished to specialize.

A. LUNCHEON to a delegation of .Swedish road hauliers is to be given by the Road HaultSge Association at the Grosvenor House Hotel, Park Lane, London, W.1, on October 2. Amongst the guests will be Mr. Alfred Barnes, the Minister of Transport. Tickets, at 25s. each, can be obtained from the secretary of the R.H.A., 146, New Bond Street, London, W.I.

This is the party of hauliers from all areas of Sweden which is visiting Britain for a week under the auspices of the Institute of Road Transport Engineers.

LORRIES UNDER HAMMER AT LANARK

EIGHT HUNDRED motor vehicles and 190 trailers are to be sold by auction, by order of the Minister of Supply, in the Memorial Hall, Lanark, Lanarkshire, from September 30 to October 2. The entrants include many lorries and breakdown vehicles.

The vehicles will be on view at No. 31 vehicle repair depot, Douglas. Lanarkshire, from September 22 to 26 inclusive, and on September 29. The auctioneers are Robert McTear and Co., Ltd., Royal Exchange Salerooms, St. Vincent Place, Glasgow.

ASTANDARD specification for heavy-gauge copper tubes for general purposes has been issued by the British Standards Institution, 28, Victoria Street, London, S.W.I, at 2s., including postage..

A26 TO THOSE LAYING UP CARS

THOSE who intend to lay up cars at I the end of this quarter must send the refund applications not later than the last post on September 30. Only the licence need be sent. There will be no days of grace at the beginning of October unless the licence is to be renewed. Quarterly licences can be surrendered for refunds at the end of October or November

ABEAMA British Electrode Classification has been prepared by the British Electrical and Allied Manufacturers' Association, 36 and 38, Kings way, Londo'n, W.C.2, in conjunction with the Institute of Welding. It is a combined effort by all the British electrode manufacturers.

It is designed to provide a simple system of applying code numbers to the different makes of electrode, and is of parlieujar value to overseas buyers. A table shows how these classification numbers compare with the American equivalents.

The British classification covers all electrodes for welding mild steel. The price is ls. net.