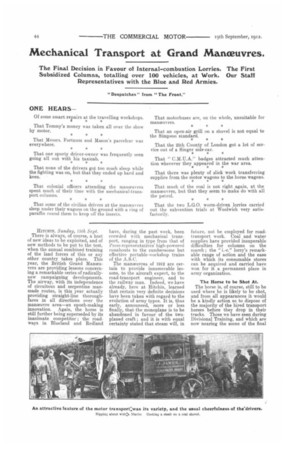 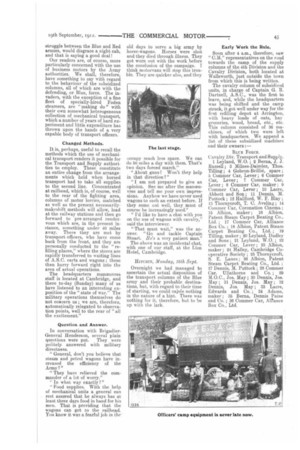 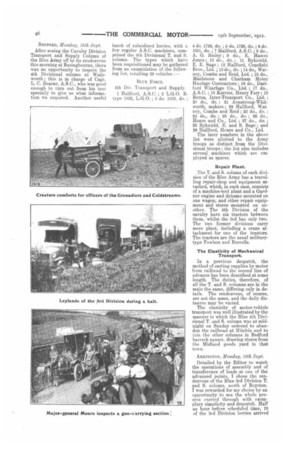 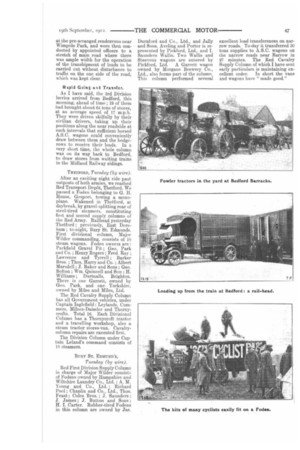 The Final Decision in Favour of Internal-combustion Lorries. The First Subsidized Columns, totalling over 100 vehicles, at Work. Our Staff Representatives with the Blue and Red Armies.

There is always, of course, a host of new ideas to be exploited, and of new methods to be put to the test, when the annual combined training of the land forces of this or any other country takes place. This year, the British Grand Manceuvres are providing lessons concerning a remarkable series of radicallynew campaigning developments. The airway, with its independence of circuitous and serpentine manmade routes, is this year actually providing straight-line thoroughfares in all directions over the manceuvre area—an epoch-making innovation. Again, the horse is still further being superseded by its inanimate competitor ; the roadways in. Blueland and Redland have, during the past week, been crowded with mechanical transport, ranging in type from that of Press representatives' high-powered runabouts to the cumbersome but effective portable-workshop trains of the A.S.C.

The manoeuvres of 1912 are certaM to provide innumerable lessons, to the aircraft expert, to the road-transport engineer, and to the railway man. Indeed, we have already, here at Hitchin, learned that certain very definite decisions have been taken with regard to the evolution of army types. It is, thus early, announced, more or less finally, that the monoplane is to be abandoned in favour of the twoplaned craft ; and it is with equal certainty stated that steam will, in future, not be employed for roadtransport work. Coal and water supplies have provided insuperable difficulties for columns on the march ; the "i.-c." lorry's remarkable range of action and the ease with which its consumable stores can be acquired and carried have won for it a permanent place in army organization.

The Horse to be Shot At.

The horse is, of course, still to be used where he is likely to be shot, and from all appearances it would be a kindly action so to dispose of the majority of the hired transport horses before they drop in their tracks. Those we have seen during Divisional Training, and which are now nearing the scene of the final

struggle between the Blue and Red armies, would disgrace a night cab, and that is saying a good deal!

Our readers are, of course, more particularly concerned with the use of business motors by the Army authorities. We shall, therefore, have something to say with regard to the behaviour of the subsidized columns, all of which are with the defending, or Blue, force. The in.vaders, with the exception of a fine fleet of specially-hired Foden steamers, are "making do" with their own somewhat heterogeneous collection of mechanical transport, which a number of years of hard experiment and little expenditure has thrown upon the hands of a very capable body of transport officers.

It is, perhaps, useful to recall the methods which the use of mechanical transport renders it possible for the Transport and Supply authorities to employ. These constitute an entire change from the arrangements which held when horsed transport had to take all supplies to the second line. Concentrated at railhead, which is, of course, well to the rear of the fighting area, columns of motor lorries, matched as well as the present necessarilymakeshift methods will allow, load at the railway stations and then go forward to pre-arranged rendezvous which are, in the present instance, something under 40 miles away. There they are met by transport officers, who have come back from the front, and they are personally conducted to the "refilling places," where the stores are rapidly transferred to waiting lines of A.S.C. carts and wagons ; these then hurry forward right into the area of actual operations.

The headquarters manceuvres staff is located at Cambridge, and there to-day (Sunday) many of us have listened to an interesting exposition of the "state of war." The military operations themselves do not coacern us ; we are, therefore, automatically relegated to observation points, well to the rear of "all the excitement."

In conversation with BrigadierGeneral Henderson, several plain questions were put. They were politely answered with military directness.

"General, don't you believe that steam and petrol wagons have increased the efficiency of the Army ?"

'" They have relieved the commander of a lot of worry."

" Food supplies. With the help of mechanical units a, general can rest assured that he always has at least three days food in hand for his men. That is providing that the wagons can get to the railhead. You know it was a fearful job in the

old days to serve a big army by horse-wagons. Horses were shot and they died through illness. They got worn out with the work before the conclusion of the campaign. I think motorvans will otop this trouble. They are quicker also, and they

occupy much less space. We can do 50 miles a day with them. That's two days forced march."

"About guns? Won't they help in that direction?"

"I am not prepared to give an opinion. See me after the manomvres and tell mo your own impressions. Anyhow we have never used wagons to such an extent before. If they come out well, they must of course be increasingly used."

"I'd like to have a chat with you on the use of wagons with cavalry," said the interviewer.

"That must wait," was the answer. "Go and tackle Captain Stuart. He's a very patient man."

The above was an incidental chat, with one of our staff, at the Lion Hotel, Cambridge.

Overnight we had managed to ascertain the actual disposition of the transport columns of the Blue army and their probable destinations, but, with regard to their time of starting, we could cajole nothing in the nature of a hint. There was nothing for it, therefore, but to be up with the lark. Early Work the Soon after 4 a.m., therefore, saw " 031." representatives on the road towards the camp of the supply columns of the 4th Division and the Cavalry Division, both located at Wallsworth, just outside the town from which this is being written.

The cavalry column of subsidized units, in charge of Captain G. B. Dartnell, A.S.C., was the first to leave, and, while the headquarters was being shifted and the camp struck, it got well under way for the first refilling depot at Arrington, with heavy loads of oats, hay groceries, wood, bread, etc., etc. This column consisted of 36 machines, of which two were left with headquarters. We append a list of these subsidized machines and their owners:— BLUE FORCE.

After seeing the Cavalry Division Transport and Supply Column of the Blue Army off to its rendezvous this morning at Basingbourne, there was an opportunity to inspect the 4th Divisional column at Wallsworth ; this is in charge of Capt. L. C. Beanie, A.S.C., who was good enough to turn out from his tent specially to give UK what information we required. Another useful batch of subsidized lorries, with a few regular A.S.C. machines, comprised the 4th Divisional T. and S. column. The types which have been requisitioned may be gathered from an examination of the following list, totalling 29 vehicles :—

The later numbers in the above list were allotted to the Army troops as distinct from the Divisional troops ; the list also includes several. machines which are employed as spares.

The T. and S. column of each division of the Blue Army has a travelling repair-shop and equipment attached, which, in each case, consists of a machine-tool plant and a Gardner engine and dynamo mounted on one wagon, and other repair equipment and stores mounted on another. The 4th Division of the cavalry have six tractors between them, whilst the 3rd has only two. The two former divisions carry more plant, including a crane attachment for one of the tractors. The tractors are the usual military. typo Fowlers and Burrells.

The Elasticity of Mechanical Transport.

In a previous despatch, the method of carting supplies by motor from railhead to the second line of advance has been described at some length. The duties, therefore, of all the T. and S. columns are in the main the same, differing only in details. The rendezvous, of course, are not the same, and the daily distances may be varied.

The elasticity of motor-vehicle transport was well illustrated by the manner in which the Blue 4th Divisional T. and S. column was at midnight on Sunday ordered to abandon the railhead at flitchin and to join the other columns in Bedford barrack square, drawing stores from the Midland goods yard in that town.

Detailed by the Editor to watch the operations of assembly and of transference of loads at one of the advanced points, I chose the rendezvous of the Blue 3rd Division T. and S. column, north of Royston.

was rewarded for my choice by an opportunity to see the whole process earrieg through with exemplary simplicity and despatch. Half an hour before scheduled time, 19 of the 3rd Division lorries arrived

at the pre-arranged rendezvous near Wimpole Park, and were then conducted by appointed officers to a stretch of main road where there was ample width for the operation of the transhipment of loads to be carried out without disturbance to traffic on the one side of the road, which was kept clear.

As I have said, the 3rd Division lorries arrived from Bedford, this morning, ahead of time ; 19 of them had brought about 64 tons of stores, at an average speed of 17 m.p.h. They were driven skilfully by their civilian drivers, taking up their positions along the near roadside at such intervals that sufficient horsed A.S.C. wagons could conveniently draw between them and the hedgerows to receive their loads. In a very short time, the whole column was on its way back to Bedford, to draw stores from waiting trains in the Midland Railway sidings.

The Red Cavalry Supply Column has all Government vehicles, under Captain Inglefield Leylands, Cornmers, Milnes-Daimler and Thornycrofts. Total 16. Each Divisional Column has a Thornycroft tractor and a travelling workshop, also a steam tractor stores-van. Cavalrycolumn repairs are executed first.

The Division Column under Captain Leland's command consists of 18 steamers.

Bunt ST. EDMUND'S, Tuesday (by wire). Red First Division Supply Column in charge of Major Wilder consists of Fodens owned by Hampshire and Wiltshire Laundry Co., Ltd.: A. M. Young and Co., Ltd.: Richard Pool ; Chaplin and Co., Ltd., Thos. Feast ; Colas Bros. ; J. Saunders ; J. James ; J. Button and Sons , H. I. Carter. Rubber-tired Fodens in this column are owned by Jas. Durnford and Co., Ltd., and Jelly and Sons. Aveling and Porter is represented by Piekford, Ltd.. and I. S.aunders Wallis. Two Wallis and Steevens wagons are entered by Pickford, Ltd. A Garrett wagon owned by Morgans Brewery Co., Ltd., also forms part of the column. This column performed several excellent load transferences on narrow roads. To-day it transferred 30 tons supplies to A.S.C. wagons on the narrow roads near Barrow in 27 minutes. The Red Cavalry Supply Column of which I have sent early particulars is maintaining excellent order. In short the vans and wagons have " made good."