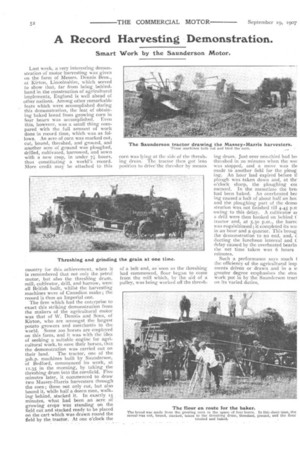 Page 24, 19th September 1907 — A Record Harvesting Demonstration.
Close
Noticed an error?
If you've noticed an error in this article please click here to report it so we can fix it.

Smart Work by the Saunderson Motor.

Last week, a very interesting demonstration of motor harvesting was given on the farm of Messrs. Dennis Bros., at Kirton, Lincolnshire, which served to show that, far from being behindhand in the construction of agricultural implements, England is well ahead of other nations. Among other remarkable feats which were accomplished during this demonstration, the feat of obtaining baked bread from growing corn in four hours was accomplished. Even this, however, was a small thing compared with the full amount of work done in record time, which was as follows. An acre of corn was marked out, cut, bound, threshed, and ground, and another acre of ground was ploughed, drilled, cultivated, harrowed, and sown with a new crop, in under 7,1 hours, thus constituting a world's . record. More credit may be attached to this country for this achievement, when it is remembered that not only the petrol motor, but also the threshing drum, mill, cultivator, drill, and harrow, were all British built, whilst the harvesting marlines were of Canadian make; the record is thus an Imperial one.

The firm which had the enterprise to exact this striking demonstration from the makers of the agricultural motor was that of W. Dennis and Sons, of Kirton, who are amongst the largest potato growers and merchants in the world. Some zoo horses are employed on this farm, and it was with the idea of seeking a suitable engine for agricultural work, to save their horses, that the demonstration was carried out on

their land, The tractor, one of the soh.p. machines built by Saunderson, of Bedford, commenced its work, at 11.35 in the morning, by taking the threshing drum intO the cornfield. Five minutes later, it commenced to draw two Massey-Harris harvesters through the corn ; these not only cut, but also bound it, while half a dozen men, walking behind, stacked it. In exactly. 15 minutes, what had been an acre of growing crops was standing on the field cut and stacked ready to be placed on the cart which was drawn round the field by the tractor. At one o'clock the corn was lying at the side of the threshing drum. The tractor then got into position to drive the thresher by means

of a belt and, as soon as the threshing had commenced, flour began to come from the mill which, by the aid of a pulley, was being worked off the thresh

ing drum. Just over one-third had be' threshed in 20 minutes when the wol was stopped, and a move was du made to another field for the ploug ing. An hour had expired before ti plough was taken down and, at thr o'clock sharp, the ploughing cot menced. In the meantime the bre; had been baked. An overheated bee ing caused a halt of about half an hot and the ploughing part of the demo stration was not finished till 4.45 p.rr owing to this delay. A cultivator a; a drill were then hooked on behind t: tractor and, at 5.30 p.m., the harrc was requisitioned ; it completed its we: in an hour and a quarter. This broug the demonstration to an end, and, C ducting the luncheon interval and t: delay caused by the overheated bearin the net time taken was 6 hours minutes.

Such a performance says much I the efficiency of the agricultural imp ments driven or drawn and in a si greater degree emphasises the stea work put in by the Saunderson tract on its varied duties.