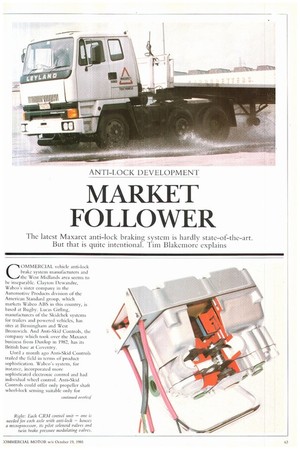 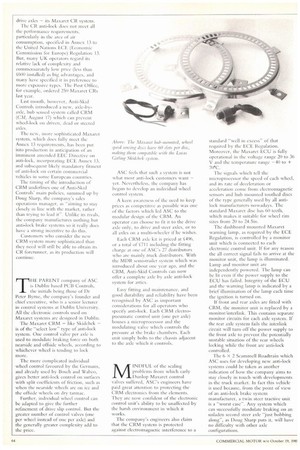 The latest Maxarct anti-lock braking system is hardly state-of-the-art. But that is quite intentional. Tim Blakemore explains

COMMERCIAL vehicle anti-lock brake system manufacturers and the West Midlands area seems to be inseparable. Clayton Dewandre, Wabco's sister company in the Automotive Products division of the American Standard group, which markets Wabco ABS in this country, is based at Rugby. Lucas Girling, manufacturers of the Skidchek systems for trailers and powered vehicles, has sites at Birmingham and West

Bromwich. And Anti-Skid Controls, the company which took over the Maxaret business from Dunlop in 1982, has its British base at Coventry.

Until a month ago Anti-Skid Controls trailed the field in terms of product sophistication. Wabco's system, for instance, incorporated more sophisticated electronic control and had individual wheel control. Anti-Skid Controls could offer only propeller shaft wheel-lock sensing suitable only for

The Cl2 anti-lock does not meet all the performance requirements, particularly in die area of air consumption, specified in Annex 13 to the United Nations EN (Economic Commission for Europe) Regulation 11 But, many UK operators regard its relative lack of complexity and commensurately low price (less than $2600 installed) as big advantages, and many have specified it in preference to more expensive types. The Post Office, for example, ordered 250 Maxaret CI2s last year.

The new, more sophisticated Maxaret system, which does fully meet the Annex 13 requirements, has been put into production in an of imminent amended EEC Directive on anti-lock, incorporating ECE Annex 13, and subsequent likely mandatory fitment of anti-lock on certain commercial vehicles in some European countries.

The timing of the introduction of CRM underlines one of Anti-Skid Controls' main policies, summed up by Doug Sharp, the company's sales operations manager, as "aiming to stay closely in line with the market, rather than trying to lead it". Unlike its rivals, the company manufactures nothing but anti-lock brake systems so it really does have a strong incentive to do this.

Customers who consider the new CRM system more sophisticated than they need will still be able to obtain its CR forerunner, as its production will continue.

T1IE PARENT company of ASC is Dublin based PCB Controls,

the initials being those of 1)r Peter Byrne, the company's founder and chief executive, who is a senior lecturer in control systems at Dublin University. All the electronic controls used on Maxaret systems arc designed in Dublin.

The Maxaret CRM — like Skidchek — is of the "select low" type of anti-lock system. One control valve per axle is used to modulate braking force on both nearside and offside wheels, according to whichever wheel is tending to lock more.

The more complicated individual wheel control favoured by the Germans, and already used by Bosch and Wabco, gives better anti-lock control on surfaces with split coefficients of friction, such as when the nearside wheels are on ice and the offside wheels on dry tarmac.

Further, individual wheel control can be adapted to give the further refinement of drive slip control. But the greater number of control valves (one per wheel instead of one per axle) and the generally greater complexity add to the price. ASC feels that such a system is not what most anti-lock customers want — yet. Nevertheless, the company has begun to develop an individual wheel control system.

A keen awareness of the need to keep prices as competitive as possible was one of the factors which led ASC to the modular design of the CRM. An operator can choose to fit it to the drive axle only, to drive and steer axles, or to all axles on a multi-wheeler if he wishes.

Each CRM axle kit is priced at 1:496, or a total of 011 including the fitting charge at one of ASC's 27 distributors who are mainly truck distributors. With the MDR semi-trailer system which was introduced about one year ago, and the CRM, Anti-Skid Controls can now offer a complete axle by axle anti-lock system for artics.

Easy fitting and maintenance, and good durability and reliability have been recognised by ASC as important considerations for all operators who specify anti-lock. Each CRM electropneumatic control unit (one per axle) houses a microprocessor and the modulating valve which controls the pressure at the brake chambers. Each unit simply bolts to the chassis adjacent to the axle which it controls.

M1 NI)EUL of the scaling problems from which early 1)unlop Maxaret control valves suffered, ASC's engineers have paid great attention to protecting the CRM electronics from the elements. They are now confident of the electronic control unit's ability to be unaffected by the harsh environment in which it works.

standard "well in excessof that required by the ECE Regulation. Moreover, the Maxaret ECU is fully operational in the voltage range 20 to 36 V and the temperature range —40 to -170°C.

The signals which tell the microprocessor the speed of each wheel, and its rate of deceleration or acceleration come from electromagnetic sensors and hub mounted toothed discs of the type generally used by all antilock manufacturers nowadays. The standard Maxaret disc has 60 teeth, which makes it suitable for wheel rim sizes from 20 to 24.5in.

The dashboard mounted Maxaret warning lamp, as required by the ECE Regulation, is controlled by a monitor unit which is connected to each electronic control unit. If for any reason the all correct signal fails to arrive at the monitor unit, the lamp is illuminated. Lamp and monitor unit are independently powered. The lamp can be lit even if the power supply to the ECU has failed. Integrity of the ECU and the warning lamp is indicated by a brief illumination of the lamp each time the ignition is turned on.

If front and rear axles are fitted with CRM, the monitor unit is replaced by a monitor/interlink. This contains separate monitor circuits for each axle system. If the rear axle system fails the interlink circuit will turn off the power supply to the front axle to prevent the potentially unstable situation of the rear wheels locking while the front are anti-lock controlled.

The 6 x 2 Scammell Roadtrain which ASC uses for developing new anti-lock systems could he taken as another indication of how the company aims to stay closely in touch with developments in the truck market. In fact this vehicle is used because, from the point of view of an anti-lock brake system manufacturer, a twin steer tractive unit is a "worst case'. Any system which can successfully modulate braking on an unladen second steer axle "just bobbing along'', as Doug Sharp puts it, will have no difficulty with other axle configurations.