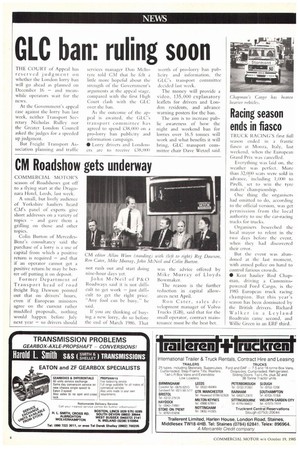 Page 6, 19th October 1985 — Racing season ends in fiasco
Close
Noticed an error?
If you've noticed an error in this article please click here to report it so we can fix it.
Keywords : Pirelli, Truck Racing, Erf, Man Se, Truck

Everything was laid on, the weather was perfect. More than 32,0(XO seats were sold in advance, including 1,000 to Pirelli, set to win the tyre makers' championship.

One thing the organisers had omitted to do, according to the official version, was get permission from the local authority to use the car-racing tracks for trucks.

Organisers beseeched the local mayor to relent in the two days before the event, when they had discovered their error.

But the event was abandoned at the last moment, with armed police on hand to control furious crowds.

• Kent haulier Rod Chap• man, driving a Cumminspowered Ford Cargo, is the 1985 European truck racing champion. But this year's season has been dominated by the British drivers. Richard Walker in a Leyland Roadtrain came second, and Willie Green in an ERF third..