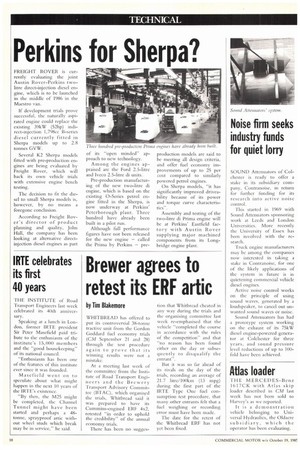 Page 20, 19th October 1985 — Brewer agrees to retest its ERF artic
Close
Noticed an error?
If you've noticed an error in this article please click here to report it so we can fix it.
Keywords : Sandbach, Erf, Man Ag, Whitbread, Fuel Efficiency

by Tim Blakemore WHITBREAD has offered to put its controversial 38-tonne tractive unit from the Gordon Goddard fuel economy trials (CM September 21 and 28) through the test procedure again to prove that its winning results were not a mistake.

At a meeting last week of the committee from the Institute of Road Transport Engineer s and the Brewery Transport Advisory Committee (BTAC), which organised the trials, Whitbread said it was prepared to have its Cummins-engined ERF 4x2, retested "in order to uphold the credibility" of the annual economy trials.

There has been no sugges

tion that Whitbread cheated in any way during the trials and the organising committee last week re-emphasised that the vehicle "completed the course in accordance with the rules of the competition" and that no reason has been found either on the day or subsequently to disqualify the entrant".

But it was so far ahead of its rivals on the day of the trials, recording an average of 21.7 litre/100km (13 mpg) during the first part of the 1RTE Type One fuel consumption test procedure, that many other entrants felt that a fuel weighing or recording error must have been made.

The date for the retest of the Whitbread ERF has not yet been fixed.