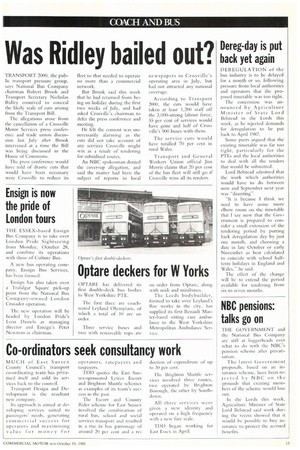 MUCH of East Sussex County Council's transport co-ordinating team has privatised itself and sold its services back to the council.

Transport Design and Development is the resultant new company.

Its approach is aimed at developing services suited to Passengers' needs, generating commercial success for operators and maximising value for money for operators, ratepayers and taxpayers.

TDD quotes the East Sussex-sponsored Lewes Escort and Brighton Shuttle schemes as examples of its team's success in the past.

The Escort and County Rider scheme for East Sussex involved the combination of rural bus, school and social services transport and resulted in a rise in bus patronage of around 20 per cent and a re

duction of expenditure of up to 30 per cent.

The Brighton Shuttle services involved three routes, two operated by Brighton Borough, the other by Southdown.

All three services were given a new identity and operated on a high frequency with a new fare scale.