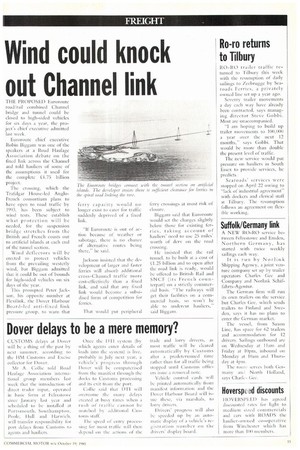 A NEW RO-R() service between Felixstowe and Emden, Northern Germany, has started with twice weekly sailings each way.

It is run by Norlink Shipping Agency, a joint venture Company set up by trailer operators Charles Gee and Company and Norlink Schiffahrts-Agentnr.

The German firm will run its own trailers on the service but Charles Gee, which sends trailers to Finland and Sweden, says it has no plans to enter the German market.

The vessel, from Saxon Line, has space for 62 trailers and accommodation for 12 drivers. Sailings outbound are on Wednesday at llam and Friday at 10pm, inbound on Monday at limam and Thursday at 4pm.