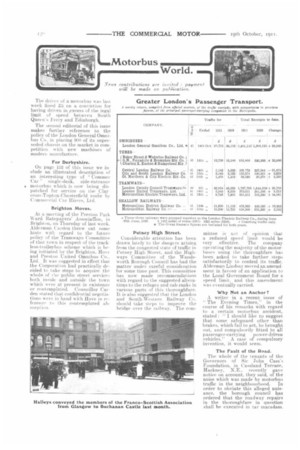 Page 8, 19th October 1911 — Motorbus World.
Close
Noticed an error?
If you've noticed an error in this article please click here to report it so we can fix it.
Keywords : Brighton And Hove, Monarch's Way, Cities In England, Hove, Brighton, Preston, Speed Limit

The driAer of a motorbus was last

week fined on a conviction for having driven in ,excess of the legal limit of speed between South Queen's Ferry and Edinburgh.

The second editorial of this issue makes further reference to the policy of the London General Omnibus Co. in placing 900 of its superseded chassis on the market in competition with new machines of modern manufacture.

On page 132 of this issue we include an illustrated description of an interesting type of " Commer Car single-deck, side-entrance

. motorbus which is now being dis patched for service on the Clay cross-Tupton-Chesterfield route by Commercial Car Hirers, Ltd.

At a meeting of the Preston Park Ward Ratepayers' Association, in Brighton, on Thursday of last week, Alderman Carden threw out some hints with regard to the future policy of the Tramways Committee of that town in respect of the trackless-t rolleybus scheme which is being initiated by the Brighton. Hove and Preston United Omnibus Co.. Ltd. It was suggested in effect that the Corporation had practically decided to lake steps to acquire the whole of Illy public street services both inside and outside the town which were at present in existence or contemplated. Councillor Carden slated t hat confidential negotiations were in hand with Hove in reference to this contemplated absorpt ion. Considerable attention has been drawn lately to the dangers arising from the congested state of traffic Putney High Street, and the Highways Committee of the Wandsworth Borough Council has had the matter under careful consideration for some time past. This committee has now made recommendations with regard to the suggested alterations to the refuges and cab ranks in various parts of this thoroughfare. It is also suggested that the London and South-Western Railway Co. should take steps to improve the bridge over the railway. The corn mittee is not of opinion that a reduced speed limit would be very effective. The company operating the majority of the motorbuses using the thoroughfare has been asked to take further steps satisfactorily to control its traffic. Alderman Lindsay moved an amendment in favour of an application to the Local Government Board for a speed limit:, and this amendment was eventually carried.

Why Not an Anchor ?

A writer in a recent issue of "The Evening Times," in the course of his remarks with regard to a certain motorbus accident, stated : " I should like to suggest that some safeguard other than brakes, which fail to act, be brought out, and compulsorily fitted to all passenger-carrying power-driven vehicles." A case of compulsory invention, it would seem.

The Fault of the Road.

The whole of the tenants of the Governors of Sir -John Cam's Foundation, in Cassland Terrace, Hackney, N.E., recently gave notice on account, they said, of the noise which was made by motorbus

traffic in the neighbourhood. In order to obviate this alleged nuisance, the borough council has ordered that the roadway repairs in the thoroughfare in question shall be executed in tar macadam.