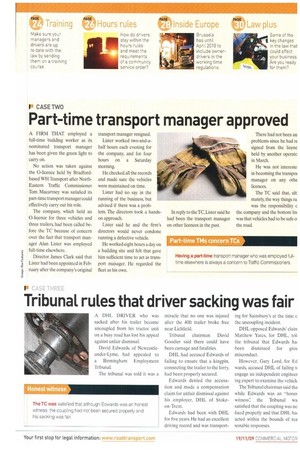 A DHL DRIVER who was sacked after his trailer became uncoupled from his tractor unit on a busy road has lost his appeal against unfair dismissal.

David Edwards, of NewcastleunderLyme, had appealed to a Birmingham Employment Tribunal.

The tribunal was told it was a miracle that no one was injured after the 40ft trailer broke free near Lichfield.

Tribunal chairman David Goodier said there could have been carnage and fatalities.

DHL had accused Edwards of failing to ensure that a kingpin, connecting the trailer to the lorry, had been properly secured.

Edwards denied the accusation and made a compensation claim for unfair dismissal against his employer. DHL of Stokeon-Trent.

Edwards had been with DHL for five years. He had an excellent driving record and was transport ing for Sainsbury's at the time the uncoupling incident.

However, Gary Lord, for Ed wards, accused DHL of failing ti engage an independent engineet ing expert to examine the vehick The Tribunal chairman said tha while Edwards was an "hones witness': the Tribunal wa satisfied that the coupling was no fixed properly and that DHL ha■ acted within the bounds of rea sonable responses.