A YEN FOR TECHNOLOGY 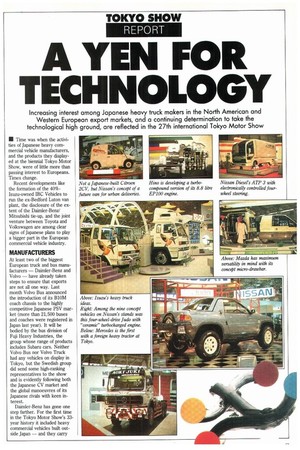 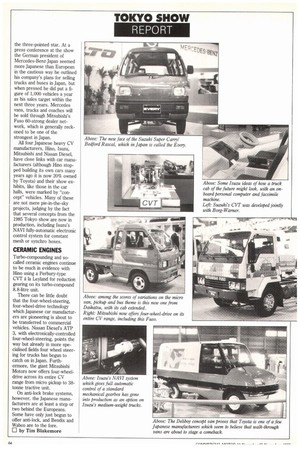 Increasing interest among Japanese heavy truck makers in the North American and Western European export markets, and a continuing determination to take the technological high ground, are reflected in the 27th international Tokyo Motor Show

• Time was when the activities of Japanese heavy commercial vehicle manufacturers, and the products they displayed at the biennial Tokyo Motor Show, were of little more than passing interest to Europeans. Times change.

Recent developments like the formation of the 40%Isuzu-owned IBC Vehicles to run the ex-Bedford Luton van plant, the disclosure of the extent of the Daimler-Benz/ Mitsubishi tie-up, and the joint venture between Toyota and Volkswagen are among clear signs of Japanese plans to play a bigger part in the European commercial vehicle industry.

At least two of the biggest European truck and bus manufacturers — Daimler-Benz and Volvo — have already taken steps to ensure that exports are not all one way. Last month Volvo Bus announced the introduction of its B1OM coach chassis to the highly competitive Japanese PSV market (more than 21,500 buses and coaches were registered in Japan last year). It will be bodied by the bus division of Fuji Heavy Industries, the group whose range of products includes Subaru cars. Neither Volvo Bus nor Volvo Truck had any vehicles on display in Tokyo, but the Swedish group did send some high-ranking representatives to the show and is evidently following both the Japanese CV market and the global manoeuvres of its Japanese rivals with keen interest.

Daimler-Benz has gone one step farther. For the first time in the Tokyo Motor Show's 33year history it included heavy commercial vehicles built outside Japan — and they carry the three-pointed star. At a press conference at the show the German president of Mercedes-Benz Japan seemed more Japanese than European in the cautious way he outlined his company's plans for selling trucks and buses in Japan, but when pressed he did put a figure of 1,000 vehicles a year as his sales target within the next three years. Mercedes vans, trucks and coaches will be sold through Mitsubishi's Fuso 60-strong dealer network, which is generally reckoned to be one of the strongest in Japan.

All four Japanese heavy CV manufacturers, Hino, lsuzu, Mitsubishi and Nissan Diesel, have close links with car manufacturers (although Hino stopped building its own cars many years ago it is now 20% owned by Toyota) and their show exhibits, like those in the car halls, were marked by "concept" vehicles. Many of these are not mere pie-in-the-sky projects, judging by the fact that several concepts from the 1985 Tokyo show are now in production, including Isuzu's NAVI fully-automatic electronic control system for constant mesh or synchro boxes.

CERAMIC ENGINES Turbo-compounding and socalled ceramic engines continue to be much in evidence with Hino using a Perbury-type CVT a in Leyland for reduction gearing on its turbo-compound 8.8-litre unit, There can be little doubt that the four-wheel-steering, four-wheel-drive technology which Japanese car manufacturers are pioneering is about to be transferred to commercial vehicles. Nissan Diesel's ATP 3, with electronically-controlled four-wheel-steering, points the way but already in more specialised fields four wheel steering for trucks has begun to catch on in Japan. Furthermore, the giant Mitsubishi Motors now offers four-wheeldrive across its entire CV range from micro pickup to 38tonne tractive unit.

On anti-lock brake systems, however, the Japanese manufacturers are at least a step or two behind the Europeans. Some have only just begun to offer anti-lock, and Bendix and Wabco are to the fore.