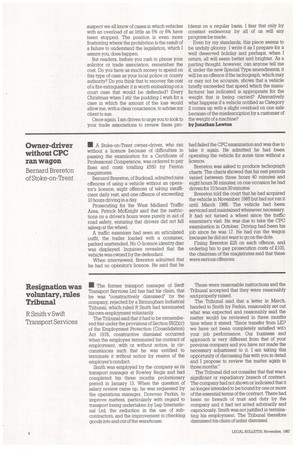 • The former transport manager of Swift Transport Services Ltd has had his claim, that he was "constructively dismissed" by the company, rejected by a Birmingham industrial Tribunal, which ruled R Smith had terminated his own employment voluntarily.

The Tribunal said that it had to be remembered that under the provisions of Section 55(2)(c) of the Employment Protection (Consolidation) Act 1978, constructive dismissal occurred when the employee terminated his contract of employment, with or without notice, in circumstances such that he was entitled to terminate it without notice by reason of the employer's conduct, Smith was employed by the company as its transport manager at Rowley Regis and had completed his three months probationary period in January 13. When the question of salary review came up, he was requested by the operations manager, Donovan Parkin, to improve matters, particularly with regard to transport being undertaken by Lep International Ltd, the reduction in the use of subcontractors, and the improvement in checking goods into and out of the warehouse. Those were reasonable instructions and the Tribunal accepted that they were reasonably and properly raised.

The Tribunal said that a letter in March, handed to Smith by Parkin, reasonably set out what was expected and reasonably said the matter would be reviewed in three months time when it stated: "Since transfer from LEP we have not been completely satisfied witi your job performance. Our business and approach is very different from that of your previous company and you have not made the necessary adjustment to it. I am taking this opportunity of discussing this with you in detail and I propose to review the matter again in three months."

The Tribunal did not consider that that was a significant or repudiatory breach of contract. The company had not shown or indicated that it no longer intended to be bound by one or more of the essential terms of the contract. There had been no breach of trust and duty by the company and it had not acted arbitrarily and capriciously. Smith was not justified in terminating his employment. The Tribunal therefore dismissed his claim of unfair dismissal.