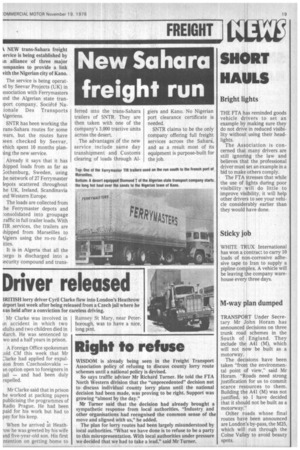 THE FTA has reminded goods vehicle drivers to set an example by making sure they do not drive in reduced visibility without using their headlights.

The Ass ciation is concerned that many drivers are still ignori g the law and believes tha the professional driver must set an example in a bid to make others comply.

• The FTA stresses that while the use of lights during poor visibility will do little to improve visibility, it will help other driver S to see your vehicle considerably earlier than they would ave done.

WHITE TRUK International has won a contract to carry 10 loads of non-corrosive adhesive tape t Iran to supply a pipline complex. A vehicle will be leaving tie company warehouse ever three days.

TRANSPORT Under Secretary Mr J hn Horam has announced decisions on three trunk road schemes in the South of England. They include the A41 (M), which will not now be built as a motorway.

The decisions have been taken "froth the environmental point of view," said Mr Horam. "Roads need strong justification for us to commit scarce resburces to them. Building th A41 (M) was not justified, s I have decided that it shou d not be built as a motorway."

Other roads whose final routes hav been announced are London's by-pass, the M25, which will run through the Colne Valley to avoid beauty spots.