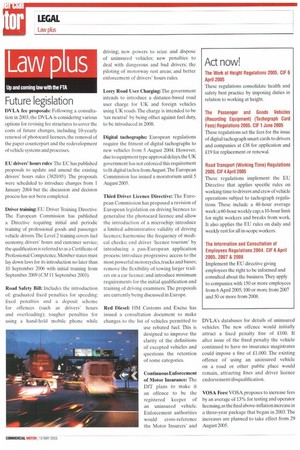 Page 44, 19th May 2005 — Future legislation
Close
Noticed an error?
If you've noticed an error in this article please click here to report it so we can fix it.

DVLA fee proposals: Following a consultation in 2003, the DVLA is considering various options for revising fee structures to cover the costs of future changes, including 10-yearly renewal of photocard licences, the removal of the paper counterpart and the redevelopment of vehicle systems and processes.

Driver training: EU Driver Training Directive. The European Commission has published a Directive requiring initial and periodic training of professional goods and passenger vehicle drivers. The Level 2 training covers fuel economy, drivers' hours and customer service; the qualification is referred to as a Certificate of Professional Competence. Member states must lay down laws for its introduction no later than 10 September 2006 with initial training from September 2009 (CM 11 September 2003).

Road Safety Bill: Includes the introduction of: graduated fixed penalties for speeding: fixed penalties and a deposit scheme for offences (such as drivers' hours and overloading); tougher penalties for using a hand-held mobile phone while driving; new powers to seize and dispose of uninsured vehicles; new penalties to deal with dangerous and had drivers; the piloting of motorway rest areas; and better enforcement of drivers' hours rules.

Lorry Road User Charging: The government intends to introduce a distance-based road user charge for UK and foreign vehicles using UK roads. The charge is intended to be 'tax neutral' by being offset against fuel duty, to be introduced in 2008.

Third Driver Licence Directive: The European Commission has proposed a revision of European legislation on driving licences to: generalise the photocard licence and allow the introduction of a microchip; introduce a limited administrative validity of driving licences; harmonise the frequency of medical checks; end driver `licence tourism' by introducing a pan-European application process; introduce progressive access to the most powerful motorcycles, trucks and buses; remove the flexibility of towing larger trailers on a car licence: and introduce minimum requirements for the initial qualification and training of driving examiners. The proposals are currently being discussed in Europe.

Red Diesel: HM Customs and Excise has issued a consultation document to make changes to the list of vehicles permitted to use rebated fuel. This is designed to improve the clarity of the definitions of excepted vehicles and questions the retention of some categories.

Continuous Enforcement of Motor Insurance: The DfT plans to make it an offence to be the registered keeper of an uninsured vehicle. Enforcement authorities would cross-reference the Motor Insurers' and DVLA's databases for details of uninsured vehicles. The new offence would initially attract a fixed penalty fine of £100. If after issue of the fixed penalty the vehicle continued to have no insurance magistrates could impose a fine of £1.000. The existing offence of using an uninsured vehicle on a road or other public place would remain, attracting fines and driver licence endorsement/disqualification.

VOSA Fees: VOSA proposes to increase fees by an average of 13% for testing and operator licensing, as the final above-inflation increase in a three-year package that began in 2003. The increases are planned to take effect from 29 August 2005.