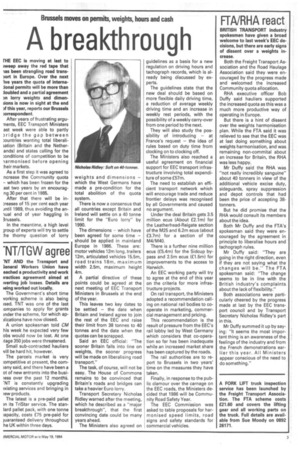 Page 5, 19th May 1984 — - NT/TGW agree
Close
Noticed an error?
If you've noticed an error in this article please click here to report it so we can fix it.

'NT AND the Transport and 3eneral Workers Union have eached a productivity and work wactices agreement aimed at iverting job losses. Details are being worked out locally.

The Government's short time vorking scheme is also being med. TNT was one of the last :ompanies to apply for grants inder the scheme, for which ap)lications have now closed.

A union spokesman told CM his week he expected very few obs would now be lost. At one /age 350 jobs were threatened. Small sub-contracted hauliers vill be hard hit, however.

The parcels market is very ;ompetitive at present, the cornJany said, and there have been a ot of new entrants into the busiless over the past 12 month-S. -NT is constantly upgrading )xisting services and bringing in lew products.

The latest is a pre-paid pallet )n its TriStar service. The stenlard pallet pack, with one tonne :apacity, costs £75 pre-paid for juaranteed delivery throughout he UK within three days.