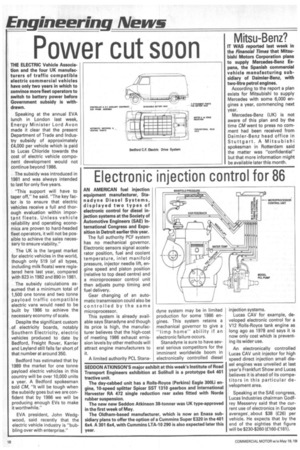 THE ELECTRIC Vehicle Association and the four UK manufacturers of traffic compatible electric commercial vehicles have only two years in which to convince more fleet operators to switch to battery power before Government subsidy is withdrawn.

Speaking at the annual EVA lunch in London last week, Energy Minister Lord Avon made it clear that the present Department of Trade and Industry subsidy of approximately £4,000 per vehicle which is paid to Lucas Chloride towards the cost of electric vehicle component development would not continue beyond 1986.

The subsidy was introduced in 1981 and was always intended to last for only five years.

"This support will have to taper off," he said. "The key factor is to ensure that electric vehicles receive a full and thorough evaluation within important fleets. Unless vehicle reliability and operating economics are proven to hard-headed fleet operators, it will not be possible to achieve the sales necessary to ensure viability."

The UK is the largest market for electric vehicles in the world, though only 519 (of all types, including milk floats) were registered here last year, compared with 823 in 1982 and 890 in 1981.

The subsidy calculations assumed that a minimum total of 1,500 one tonne and two tonne payload traffic compatible electric vans would need to be built by 1986 to achieve the necessary economy of scale.

Despite the signifiaant custom of electricity boards, notably Southern Electricity, electric vehicles produced to date by Bedford, Freight Rover, Karrier and Leyland still falls far short of that number at around 350.

Bedford has estimated that by 1989 the market for one tonne payload electric vehicles in this country will be over 10,000 units a year. A Bedford spokesman told CM, "it will be tough when the subsidy goes but we are confident that by 1986 we will be producing enough EVs to make it worthwhile."

EVA president, John Wedgwood, said recently that the electric vehicle industry is "bubbling over with enterprise."