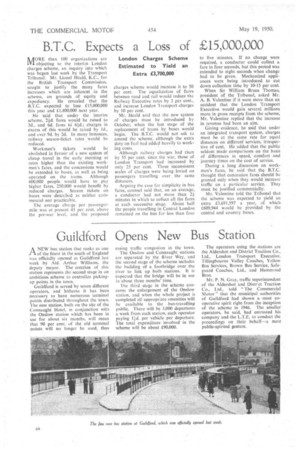 A NEW bus station that ranks as one of the finest in the south of England was officially opened at Guildford last week by Aid. Arthur Williams, the deputy mayor. The erection of this station represents the second stage in an ambitious scheme to centralize pickingup points in the town.

Guildford is served by seven different operators, and hitherto it has been necessary to have numerous terminal points distributed throughout the town. The new station, built on the site of the Connaught Hotel, in conjunction with the Onslow station which has been in use for about six months, will mean that 90 per cent, of the old terminal points will no longer be used, thus

easing traffic congestion in the town.

The Onslow and Connaught stations are Separated by the River Wey, and the second stage of the scheme includes the building of a footbridge over the river to link up both stations, it is expected that the bridge will be in use in about three months' time.

The third stage in the scheme concerns the enlargement of the Onslow station, and when the whole project is completed all appropriate amenities will be available to the bus-travelling public. There will be 3,000 departures a week from each station, each operator paying 11,d. per vehicle per departure. The total expenditure involved in the scheme will be about £90,000. The operators using the stations are the Aldershot and District Traction Co.. Ltd., London Transport Executive. Tillingbourne Valley Coaches, Yellow Bus Services, Brown Bus Service, Safeguard Coaches, Ltd., and Hammond Bros.

Mr. P. N. Gray, traffic superintendent of the Aldershot and Distr'et Traction Co., Ltd., told "The Commercial Motor" that the municipal authorities of Guildford had shown a most cooperative spirit right from the inception of the scheme in 1946. The smaller operators, he said, had entrusted his company and the L.T.E. to conduct the proceedings on their behalf—a most public-spirited gesture.