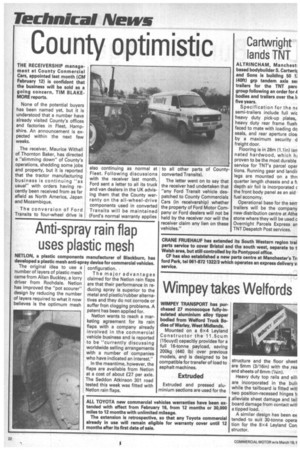 THE RECEIVERSHIP management at County Conmercial Cars, appointed last month (CM February 12) is confident that the business will be sold as a going concern, TIM BLAKEMORE reports.

None of the potential buyers has been named yet, but it is understood that a number have already visited County's offices and factories in Fleet, Hampshire. An announcement is expected within the next few weeks.

The receiver, Maurice Withal! of Thornton Baker, has directed a "slimming down" of County's operations, shedding some jobs and property, but it is reported that the tractor manufacturing business is continuing "as usual" with orders having recently been received from as far afield as North America, Japan and Mozambique.

The conversion of Ford Transits to four-wheel drive is also continuing as normal at Fleet. Following discussions with the receiver last month, Ford sent a letter to all its truck and van dealers in the UK advising them that the County warranty on the all-wheel-drive components used in converted Transits will be maintained (Ford's normal warranty applies to all other parts of Countyconverted Transits).

The letter went on to say that the receiver had undertaken that "any Ford Transit vehicle despatched to County Commercials Cars (in receivership) whether the property of Ford Motor Company or Ford dealers will not be held by the receiver nor will the receiver claim any lien on these vehicles."