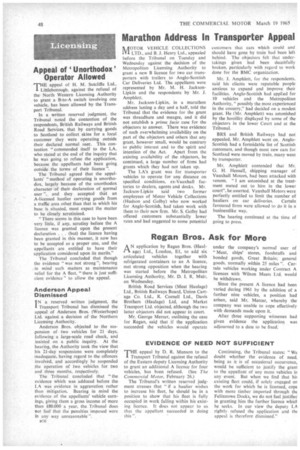 Page 50, 19th March 1965 — Appeal of 'Unorthodox' Operator Allowed
Close
Noticed an error?
If you've noticed an error in this article please click here to report it so we can fix it.

T' appeal of H. M. Sutcliffe Ltd.. Littleborough, against the refusal of the North Western Licensing Authority to grant a B-to-A switch involving one vehicle, has been allowed by the Transport Tribunal.

In a written reserved judgment, the Tribunal noted the contention of the respondents, British Railways and British Road Services, that by carrying goods to Scotland to collect skins for a local customer they were operating outside their declared normal user. This contention "commended itself to the LA, who stated at the end of the inquiry that he was going to refuse the application, because the appellants had been going outside the terms of their licence ".

The Tribunal agreed that the appellants' " method of operating is unorthodox, largely because of the unorthodox character of their declaration of normal user ", and they accepted that an A-licensed haulier carrying goods from a traffic area other than that in which his base is situated, must expect the matter to be closely scrutinized.

"There seems in this case to have been very little, if any, scrutiny before the A licence was granted upon the present declaration . . (but) the licence having been granted in this manner, it now has to be accepted as a proper one, and the appellants are entitled to have their application considered upon its merits."

The Tribunal concluded that though the evidence " was not strong", bearing in mind such matters as maintenance relief for the A fleet, " there is just sufficient evidence" to allow the appeal.

IN a reserved written judgment, the Transport Tribunal has dismissed the appeal of Anderson Bros. (Westerhope) Ltd. against a decision of the Northern Licensing Authority.

Anderson Bros. objected to the suspension of two vehicles for 21 days, following a large-scale road check, and insisted on a public inquiry. At the hearing, the Authority took the view that his 21-day suspensions were completely inadequate, having regard to the offences involved, and accordingly he suspended the operation of two vehicles for two and three months, respectively.

The Tribunal concluded that "the evidence which was adduced before the LA was evidence in aggravation rather than mitigation. Bearing in mind the evidence of the appellants' vehicle earnings, giving them a gross income of more than £80.000 a year, the Tribunal does not feel that the penalties imposed were in any way unreasonable ".