I Driver dragged from cab by 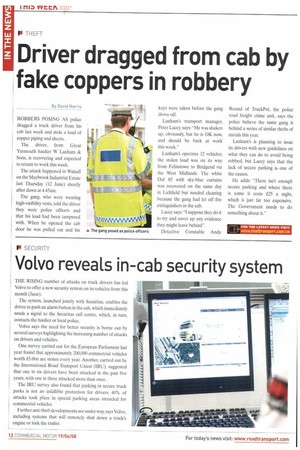 Page 12, 19th June 2008 — I Driver dragged from cab by
Close
Noticed an error?
If you've noticed an error in this article please click here to report it so we can fix it.
Keywords : Truck Driver, Lanham, Lacey

By David Harris ROBBERS POSING AS police dragged a truck driver from his cab last week and stole a load of copper piping and sheets.

The driver, from Great Yarmouth haulier W Lanham & Sons, is recovering and expected to return to work this week.

The attack happened in Walsall on the Maybrook Industrial Estate last Thursday (12 June) shortly after dawn at 4.45am.

The gang, who were wearing high-visibility vests, told the driver they were police officers and that his load had been tampered with. When he opened the cab door he was pulled out and his keys were taken before the gang drove off.

Lanham's transport manager, Peter Lacey, says: "He was shaken up, obviously, but he is OK now, and should be back at work this week."

Lanham's operates 12 vehicles; the stolen load was on its way from Felixstowe to Bridgend via the West Midlands. The white Daf 85 with sky-blue curtains was recovered on the same day in Lichfield but needed cleaning because the gang had let off fire extinguishers in the cab.

Lacey says: "I suppose they dolt to try and cover up any evidence they might leave behind".

Detective Constable Andy Round of TruckPol, the police road freight crime unit, says the police believe the same gang is behind a series of similar thefts of metals this year.

Lanham's is planning to issue its drivers with new guidelines on what they can do to avoid being robbed, but Lacey says that the lack of secure parking is one of the causes.

He adds: "There isn't enough secure parking and where there is some it costs £25 a night, which is just far too expensive. The Government needs to do something about it"